A scene from the “World Without Zionism” conference today in Iran.
These trained Iranian female fighters hope to spread Basiji thought to defeat the U.S. 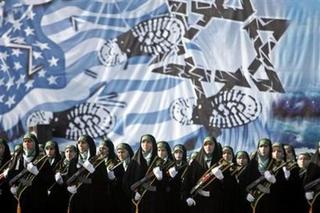 Iran’s newly elected hardliner president, Mahmoud Ahmadinejad, threatened Israel and called on Palestinians to unite today in his speech at the “World Without Zionism” seminar:

“The establishment of the Zionist regime was a move by the world oppressor against the Islamic world,” the president told a conference in Tehran entitled ‘The World without Zionism’.

“The skirmishes in the occupied land are part of a war of destiny. The outcome of hundreds of years of war will be defined in Palestinian land,” he said.

His comments were the first time in years that such a high-ranking Iranian official has called for Israel’s eradication, even though such slogans are still regularly used at regime rallies.

Addressing about 4000 students gathered in an interior ministry conference hall, President Ahmadinejad also called for Palestinian unity, resistance and a point “where the annihilation of the Zionist regime will come”.

“The Islamic umma (community) will not allow its historic enemy to live in its heartland,” he said in the fiery speech that cantered on an “historic war between the oppressor and the world of Islam”.

The term “oppressor” is used by the clerical regime to refer to the United States.

Ahmadinejad also made it clear that Iran will not follow in the footsteps of Pakistan or Qatar and will not move to normalize relations with Israel:

Mahmoud Ahmadinejad also denounced attempts to recognize Israel or normalize relations with it.

“There is no doubt that the new wave (of attacks) in Palestine will wipe off this stigma (Israel) from the face of the Islamic world,” Ahmadinejad told students Wednesday during a Tehran conference called “The World without Zionism.”

Ahmadinejad also repeated the words of the founder of Iran’s Islamic revolution, Ayatollah Ruhollah Khomeini, who called for the destruction of Israel.

“As the Imam said, Israel must be wiped off the map,” said Ahmadinejad, who came to power in August.

A protest is planned for Friday against Israel:

On October 28, the last Friday of the holy month of Ramadan, there are plans to organise a huge protest in Iran against Israel and in support of the Palestinians. Iran does not recognise the the state of Israel.

Earlier today, Russia and Iran called for a political solution to the international row over Iran’s nuclear dossier.