** The African Nation founded by freed American Slaves back in 1847, held a historic vote on Tuesday. ** 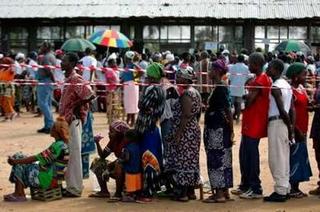 Liberians wait to vote at a camp for internally displaced persons in Brewersville, Liberia, October 11, 2005. Thousands of Liberians voted enthusiastically on Tuesday in elections they hope will build a better future for a West African country laid waste by one of the continent’s most brutal civil wars. (Reuters)

Liberians excitedly waited to cast their votes in the first Presidential Election since Civil War, a war that killed 250,000 Liberians and lasted 14 years.

Liberia voted under sunny then rainy skies to elect a post-war president from among a field of lawyers and warlords led by footballer George Weah and former World Bank economist Ellen Johnson Sirleaf.

Many of the 1.35 million registered voters arrived at 3,070 stations around the densely forested west African nation in pre-dawn darkness, standing patiently for up to twelve hours to cast their ballots for president and the bicameral legislature.

“They sent me here, they sent me there and I have been standing in the sun for too many hours,” said Joseph Sharpe, one of hundreds of people waiting outside the bullet-scarred executive pavillion, once the lavish home of long-ruling President William Tubman.

“But I will wait until midnight if I have to, because this is my right.”

Voting appeared to be strong as some voters started to line up in the night in front of voting stations:

“I’m voting for a better life, a better leader that can bring peace,” said Willie Miller, a 58-year-old unemployed man. “Years ago, the country was good … it was beautiful. Now we’re bad off, barely able to feed ourselves.”

Eighty percent of the country’s 3 million people are unemployed.

“We want to be free, with no more war. The new president must take care of us,” said Sarah Kanga, a 43-year old market trader and mother of nine. “We’ll work for ourselves, but if the country is free, then the money will come.”

Mineral-rich Liberia, once one of the most prosperous countries in Africa, fell into civil war in 1989 when ex-President Charles Taylor, then a warlord, launched his insurgency.

Taylor won elections during an interlude in fighting in 1997, but another rebellion broke out in 2000. Under heavy international pressure, Taylor stepped down and left the country in 2003, and a peace deal was quickly signed.

Liberia was founded in 1847 by former US slaves. 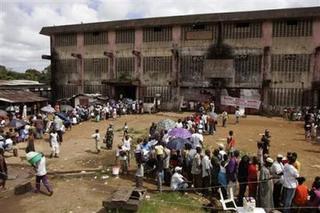 People queue to cast their vote in Monrovia, Liberia Tuesday, Oct. 11, 2005. Voters cast ballots Tuesday for Liberia’s first elected president since the end of a 14-year civil war that destroyed the west African nation, killed tens of thousands of people and left the living mired in abject poverty. (AP)

The US has invested heavily to the development of Liberia… Heavily! Jimmy Carter added today that the “US must remain neutral in the process”, hinting at something, but I am not so sure what?

The United States “has to be completely neutral and not make any preference” for any of the 22 candidates contesting the presidency, Carter told reporters after an early-morning tour of polling stations in the capital Monrovia.

“It’s very important because it is not always the case that the very powerful countries maintain their distance” and allow polls to reflect only the will of the people, he added.

Observing his 61st election on behalf of his non-profit Carter Center, the 81-year-old former president, who also monitored the 1997 polls won by warlord Charles Taylor, said it was also crucial for the United States to maintain its commitments to Liberia in terms of funding and support for good governance.

The United States must remain “deeply and permanently involved” in Liberia’s affairs, both for the country and for the troubled region that risks tipping back into conflict without sustained international attention, he said.

A senior-level US delegation led by Assistant Secretary of State for African Affairs Jendayi Frazer, was also in Liberia observing the elections.

Speaking to reporters, Frazer said the United States has committed over a billion dollars to Liberia in the last two years for ensuring the security sector and helping rebuild the tattered infrastructure in the war-torn country, including some 10 million dollars for the ongoing electoral process.

Jimmy recieved much flack during one of his last election outings in Ethiopia. There he concluded the election process as “free and fair” before the vote counting even began,… which lasted for months, and before the army started to gun down protesting students! The EU refuted the claims which evidently irritated the Carter Center. This may be what his bitter comment was about from his interview earlier today.

The next few days in Liberia will be crucial to see how the voters accept the results.