** Kashmiri terrorist groups appear to have lost 15 of their training camps during the earthquake! **

Pakistani President Musharraf portrays confidence and concern as he calls on the World for Aid. 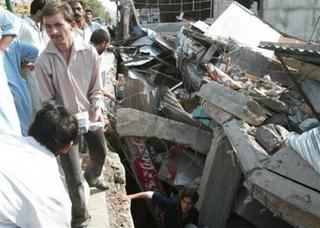 Pakistani officials are now saying that children were the biggest casualties:

Maj Gen Shaukat Sultan, quoted by the AFP news agency, said children had been the biggest casualties. Many were killed when schools collapsed.

At least 20,000 people are thought to have been killed in Pakistan, with some reports suggesting the toll may double.

Many areas hit by the quake are only just being reached by aid workers.

A road has been re-opened into Muzaffarabad, the capital of Pakistan-administered Kashmir where 11,000 are thought to have died, allowing trucks to deliver food and medical supplies.

The rescue effort has been slowed by landslides which have wiped out roads and bridges, and a lack of helicopters to ferry in vital heavy lifting equipment.

Correspondents say anger is mounting in communities where significant outside help has yet to arrive, amid fears time is running out to find survivors. 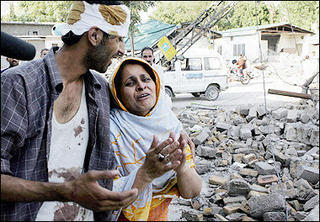 Rescuers were struggling to reach cold and traumatised earthquake survivors cut off in the mountains of northeast Pakistan, as the authorities warned the death toll could reach 40,000. (AFP)

The US is in the forefront of the relief efforts flying in helicopters from Afghanistan to help with the disaster:

A large C-17 aircraft also flew to Pakistan carrying 12 palettes of food, water and blankets, the US military said, as the relief operation after Saturday’s huge earthquake kicked into gear.

The twin-rotor Chinooks were useful for “lifting support” as they were able to pick up several people at once and carry tonnes of aid, he said.

“The Black Hawks are smaller, they have more manoeuvrability, are quicker transport and efficient,” useful in rescue operations, he said. 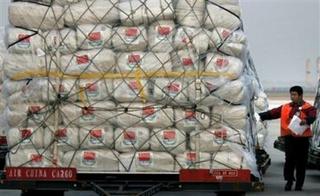 The US has already allocated 50 million dollars to the earthquake relief efforts.

Donor nations are rushing supplies to the area:

Doctors, helicopters, food, tents and sniffer dogs were rushed to quake-devastated Pakistan on Monday as the death toll from the disaster topped 20,000.

Aid agencies said more than 120,000 people were in urgent need of shelter and up to four million could be left homeless by the 7.6 magnitude earthquake which wrecked buildings and villages in Pakistan’s northern mountains.