Update: (9:15 AM CST) As the morning comes the death toll rises from the worst recorded earthquake in Pakistani history. Yesterday started with initial reports of an estimated 1,000 deaths. Today that number has swelled to an estimated 20,000-30,000 deaths in the Pakistani Kashmir region! 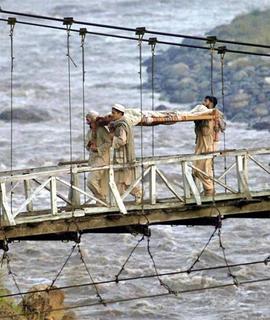 Pakistani rescuers carry an injured person recovered from one of the collapsed structures in the village of Balakot, in Pakistan’s North West Frontier Province on Sunday, October 9, 2005. The devastating earthquake that struck large parts of South Asia has caused the biggest disaster in Pakistan’s history, the country’s army spokesman said. (Hindustan Times)

Pakistan and India are setting aside political differences to help those suffering in the disputed Kashmir.

Joe Gandelman at The Moderate Voice, as pointed out by Glenn Reynolds, has a tremendous roundup including some information from bloggers in the area.

VIDEO OF THE TRAGEDY SHOWS MANY HOMELESS AND MASSIVE AID STARTING TO HEAD TO THE SUFFEREING PEOPLE, HERE

Death toll climbs above 18,000 in Southern Asia!
But, Another Paksitani News Source is claiming the toll is above 25,000!

The casualty toll from the 7.6-magnitude tremor rose sharply Sunday as rescuers struggled to dig people from the wreckage, their work made more difficult as rain and hail turned dirt and debris into sticky muck.

Pakistan’s private Aaj television reported the Pakistani death toll had jumped to 25,000. But the report, which included casualties in Pakistani-controlled Kashmir, gave no source for its figures and there was no immediate confirmation from Pakistani officials but they have said the toll will rise. (2:00 AM CST 10-9)

BBC map shows the epicenter of the quake. Tremors could be felt from Kabul to New Delhi. Most of the death and destruction occurred in Pakistani Kashmir. The capital there, Muzaffarabad, saw half of its buildings collapse or destroyed. (BBC)

Major Earthquake Destruction and Death
Click on picture to enlarge 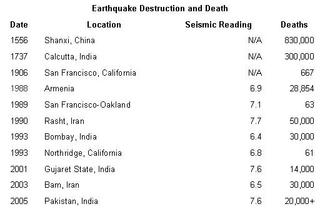 With the massive destruction from the earthquake in southern Asia on Saturday, and with the death toll still mounting, I am reminded of an article I read in 2001 after the earthquake in India, by Jonah Goldberg, from National Review Online, titled…

On December 7, 1988, there was an earthquake in Armenia (Turkish toilets) that killed 28,854 people. It recorded 6.9 on the Richter scale. Less than a year later there was an earthquake in San Francisco and Oakland (flush toilets). It was a 7.1 on the Richter scale, but it claimed 63 casualties. About seven months later there was a quake near Rasht, Iran, (Turkish toilets, and soup served to Jews) scoring six tenths of a point higher, at 7.7. But that earthquake killed 50,000 people.

…Well, getting back to earthquakes (with sense-a-round!), wouldn’t intuition suggest that as the population surges and we live in more and more crowded cities that earthquakes would be more deadly in more urban areas? Well it’s not the case. Far less people die in earthquakes today than they did in the past, even though billions more people live in cities made of concrete and steel and other things that hurt a lot more than grass and straw when they fall on your head. In 1556, 830,000 people died in the Shanxi, China quake. As bad as this week’s Indian disaster was, it can’t compare to the subcontinental quakes of earlier this century or, say, the 300,000 dead in the Calcutta quake of 1737. The famous San Francisco earthquake of 1906 killed 667 people, ten times more than the quake of 1989 even though it had half the people. I would bet that if the earthquake that hit India this week, had hit Los Angeles, the deaths would be in the double digits, not over 20,000. Modern buildings have a tendency to fall down less than squalid tenements or shantytowns. Especially when you’re rich enough to make them quake proof…

The whole thing is worth reading.

And,… Unlike the US Katrina disaster where the death toll started at 10,000 and decreased over time. This disaster in Southern Asia started at 1,000, yesterday. (I remember the tsunami reporting being similar last year.)

Think Things Through has more to say on the obvious cultural differences in reporting.

HERE is a link to the Salvation Army South Asia donation site.
Hat Tip to Morgan

John at Powerline has more to add to the prosperity and freedom argument.