Most of the residents in the rioting suburb are immigrants from Northern Africa. Clichy-sous-Bois, is a Paris suburb of just over 28,000 where 50 percent of the population is under 25 and one-quarter of the wage earners in each household have no job. 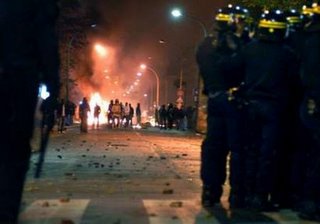 French youth face riot police in the Paris suburb of Clichy, October 29, 2005. Hundreds of French youths fought with police and set cars ablaze on Saturday in a second night of rioting which media said was triggered when two teenagers were electrocuted while fleeing police. The teenagers were killed and a third seriously injured on Thursday night when they were electrocuted in an electricity sub station as they ran away from police investigating a break-in, media reported. (Reuters)

Youths rioted for the second night in a Paris suburb torching 30 cars and fighting with police. Parisians worried that the situation was escalating:

Hundreds of French youths fought with police and set cars ablaze in a northern Paris suburb early yesterday morning in a second successive night of rioting.

The disorder was triggered last week when two teenagers were electrocuted and killed in a local substation while fleeing from police. French authorities insist they were running away from officers investigating a break-in, but people in Clichy-sous-Bois claim that the dead youths had committed no crime.

Firefighters extinguished more than 30 burning cars and dozens of dustbins pushed into makeshift barricades on Friday night and Saturday morning as running battles in the streets of the north-eastern suburb pitted more than 200 riot police against scores of hooded youths. At least one shot was fired at the police, 19 people were detained and 15 officers and one journalist injured, an official spokesman said.

Clichy-sous-Bois is home to 28,300 people a large number of whom are recent immigrants from North or Central Africa. Most live in rundown, low-rise public housing estates. Unemployment rates are among the highest in France and many locals see the police as ‘the enemy’.

Claude Dilain, Socialist mayor of the suburb, called for an ‘efficient, rapid and transparent investigation’ into the deaths of the two teenagers. A relative of one of the dead youths, who were identified by local media as 15-year-old Banou and 17-year-old Ziad, said that the two were among nine boys were playing football and ‘doing nothing wrong’. ‘But one of them did not have an identity card, and so they were scared when they saw the police and ran,’ she said.

One of the last times Cliche was in the news, in October 2001, molotov cocktails were thrown at the Jewish Synagogue, a non-descript building during Kol Nidre services. In August 2002, the synagogue was attacked again. 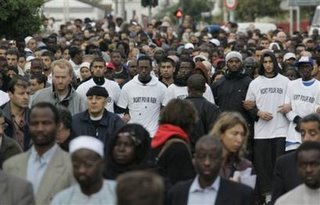 Clichy-Sous-Bois residents, some wearing t-shirts reading ‘Death for Nothing’, as they walk for the peace Saturday, Oct. 29, 2005, after riots erupted between youths and security forces in the Clichy-Sous-Bois suburb of Paris, France. Hundreds of angry youths went on the rampage Friday, setting fire to cars and shop fronts, after two of their peers died when they were electrocuted while fleeing police. (AP)

The residents held a silent rally after the violence during the night:

Firefighters went into action around 40 times on Friday night in the northeastern suburb where many of the 28,000 residents are African immigrants, police and fire officers said.

After the violence, several hundred took part in a silent march to honour the two dead teenagers, some wearing T-shirts reading “Dead for nothing”.

“Thanks to you, France will now respect us more than this morning, before this silent march,” said Claude Dilain, mayor of Clichy-Sous-Bois, a neighbourhood of high-rise public housing projects.

“We are showing our real face, that of united citizens, whatever our origin or religion or faith,” he said at the march, where the victims’ families appealed for calm among local young people.