Kathleen Willey and Juanita Broddrick speak out for abused women at Clinton Library. 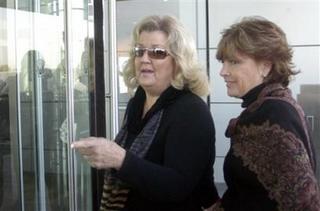 Kathleen Willey and Juanita Broddrick spoke out for the rights of abused women everywhere as they toured the Clinton Library in Arkansas on Wednesday: (via Drudge Report)

Kathleen Willey and Juanita Broddrick criticized what they called a campaign of intimidation meant to silence them after they came forward with their allegations.

“If she (Mrs. Clinton) is such a champion of women and women’s rights and women’s empowerment, then she needs to explain her role in what they tried to do to us,” said Willey, a Virginia real estate agent.

She has said the then-president fondled her when she met privately with him at the White House in 1993 to seek a job.

Broaddrick, an Arkansas nursing home owner who claimed Clinton sexually assaulted her at a Little Rock hotel in 1978 when he was Arkansas attorney general, said Hillary Clinton “did everything she could to protect him to keep her own power.”

A spokeswoman for Sen. Clinton, D-N.Y., did not immediately return calls seeking comment.

Earlier this month Bill Clinton drew fire for requesting Saudi donations for his library project just months after they refused to hand Bin Laden over to the Clinton Administration:

Ex-president Clinton’s decision to ask Saudi Crown Prince Abdullah for a high-dollar donation to his presidential library came just months after Saudi leaders rebuffed his request to take custody of Osama bin Laden – when officials in Sudan, where the al Qaeda chief was then living, offered him to the U.S.

Former FBI director Louis Freeh revealed on Thursday that Clinton personally put the touch on Abdullah after failing to get the Saudi leader’s cooperation in the probe into the June 1996 Khobar Towers bombing, which – according to the 9/11 Commission – was a joint al Qaida-Hezbollah operation.

In a 2002 speech to a New York business group, Clinton confirmed the Sudanese offer, and said he tried to press the Saudis to take bin Laden.