Chechen Terrorists Attack Russian City of Nalchik in the most extensive terrorist assault ever carried out on a whole city !

* At least 60 are reported killed in the clashes, including civilians!
* Putin orders a blockade on the city of Nalchik!
* Hostages reportedly taken at police station! (Interfax reports on hostages as well)
* Putin issues “Shoot to Kill” order!
* Residents are trying to flee the city of 235,000.
* Chechen Fighters have walled themselves up in the Interior Ministry Building, the police station and a local store.
* Simultaneous raids on 3 police headquarters, federal military bases, a gun store and the regional airport 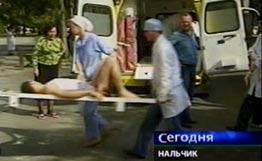 88 reported in hospital after Chechen attack on Russian City of Nalchik.

The masterminds are identified as “two prominent Wahhabites and are wanted in Karabdino-Balkariya and Ingushetia for particularly serious crimes.”

REUTERS SHOWS SCENES FROM THE FIGHTING IN NALCHIK,
VIDEO HERE

Parents searched frantically for their children in the school yard caught up in the fighting as black smoke billowed overhead. 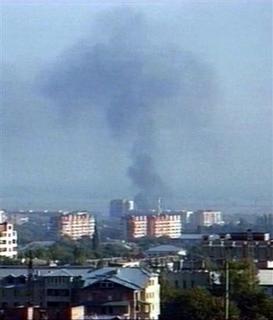 Smoke from burning houses rises over Nalchik, southern Russia Thursday, Oct. 13, 2005 in this image taken from television. Militants launched simultaneous attacks on police and government buildings in one of the main cities in Russia’s turbulent Caucasus region on Thursday, sparking battles involving heavy-arms fire and explosions that forced the evacuation of schools and left corpses lying in the streets. Chechen rebel forces took responsibility for the attack. (AP)

At least 60 have died including children as Chechen terrorists spilled their fighting into a neighboring Caucasus State today.

Civilians are believed to be among 60 people killed in clashes between police and rebels in Russia’s volatile North Caucasus, say Russian media reports.
Local officials say 50 gunmen were killed in the city of Nalchik, the capital of Kabardino-Balkaria province.

Chechen rebel forces have claimed responsibility for the series of attacks on government buildings, says a pro-rebel website.

A regional leader told Itar-Tass news agency that a third of the 150 rebels that took part in attacks had been killed.

President Arsen Kanokov also said 12 civilians had been killed, although this figure has not been confirmed.

Fighting broke out in the Belaya Rechka area early on Thursday and spread to several parts of the city.

“There was heavy fighting everywhere; attacks have been repelled; there have been fatalities and wounded; but part of the attackers has been destroyed and scattered,” the official said.

The school caught up in the fighting is based near the local anti-terrorism unit, the Associated Press reported.

A teacher said all the pupils were evacuated. Parents searched frantically for their children in the school yard as black smoke billowed overhead.

A map shows the area involved is west of Chechnya and north of Georgia.

As many as 300 Chechen terrorists may have been involved in the attacks:

Chechen rebels claimed responsibility for the attacks in Nalchik, the capital of Kabardino-Balkariya, a republic near Chechnya. The republic has suffered a growing wave of violence that apparently is connected to Islamic extremists and that is seen as a spillover of the Chechen rebels’ decade-long fight against Russian forces.

Sporadic shooting continued for hours after the morning attacks began, and amid the chaos officials gave varying accounts of casualties and the number of attackers. At least 13 people were killed and 75 wounded, local health ministry spokesman Stepan Kuskov said, including three civilians, three rebels and seven police officers.

The republic’s president, Arsen Kanokov, was quoted by the ITAR-Tass news agency as saying about 50 militants had been killed. Estimates of the number of attackers ranged from 60 to 300. 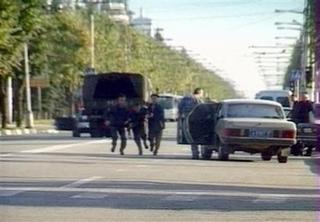 Conflicting reports about a school seizure:

Agency Regnum, referring to teachers of school of №5 in Nalchik, has said a clash took place in the building. Children had been evacuated, many have run up. Later on, a girl has run out from the building and said that the educational institution is seized by militants, and her brother still in the school. But the source in power structures has reported RIA Novosti that “hearings about capture of school are not contrary to fact”. The school had been evacuated.

Nalchik is not far from Beslan, the site of the school seige last year:

Federal forces blocked off much of the city of 235,000, but intense shooting from automatic rifles and grenade-launchers could b
e heard in the center.

Nalchik is about 60 miles northwest of Beslan, where Chechen rebels raided a school in September 2004, taking hundreds of hostages. More than 330 people, half of them children, died in the raid, which ended in explosions and gunfire after three days.

Russian expert, Andrew at Siberian Light, is following the story.
Athena promises to follow the story.
The Jawa Report has more on the story with a companion post at Interested Participant.
Ace is shocked.
Michelle Malkin is openly and shockingly saying the “I” word.
Lorie Byrd at Polipundit is noting the attack.
Glenn Reynolds was on the story early.
Charles at LGF was writing about the story before the rest of the West was awake.
The Anti-Idiotarian Rottweiler is not amused.
Winds of Change is carrying this and other hot topics on the War on Terror today.

Update: (Thursday AM CST) Reports are coming out that Chechen fighters have walled themselves up in the Interior Ministry Office, the Police Station (as many as 7) and a Local Store(2).

Interfax is reporting on the attackers and the situation:

One of the leads suggests that the attack of militants on power structures in Nalchik on Tuesday morning was provoked by the detention of a Wahhabi group whom they are now trying to set free.

‘Fighting is going on everywhere, militants trying to capture cars and break out of the city. They also attacked a company of the 135th Mounted Infantry Regiment in the airport area. According to preliminary information, the situation is under control, the attack on the airport has been repelled’, a source from the city garrison headquarters told Interfax-South.

Machine-gun fire and explosions are being heard around the city.

‘As for civilian victims, there are such of course, but it is too soon to speak about their number’, the source told Interfax.

Update 2: More on the Hostage Situation:

A group of militants are holding a number of people hostage in the building of Police Station No. 3 near the southern Russian city of Nalchik, Russian news media reported on Thursday.

The militants have ensconced themselves on the ground floor of the police station building on Kabardinskaya Street on the outskirts of Nalchik, the capital city of the Kabardian-Balkar Republic.

“Militants have managed temporarily to secure their hold on theground floor of the four-storey building. Police officers on the first floor have fought back the militants’ attack, Dmitry Kozak, presidential plenipotentiary representative in the Southern Federal District, was quoted by the Itar-Tass news agency as saying.

The authorities have brough in personnel reinforcements and military hardware to fight the militants holed up in the police station building.

Terrorists were planning on flying planes to Moscow:

Rebels were reportedly trying to seize the local airport to hijack a military plane.

The source believes the rebels intended to fit it out with explosives and fly it to Moscow.

Basayev is not believed to have been one those killed today after earlier reports that he was killed in the attacks.

For more on Basayev and his handiwork I have some updates HERE.

Update 3: Interfax is reporting that 59 terrorists were killed, 17 arrested,… “The shooting has stopped everywhere else in the city, except for the Third Police Precinct, the rest of the militants must be hiding.”

The BBC is reporting now that 12 police and 12 civilians were killed.