During a meeting of an hour and 40 minutes, Bono and Bush discussed debt relief, AIDS, malaria and world trade. 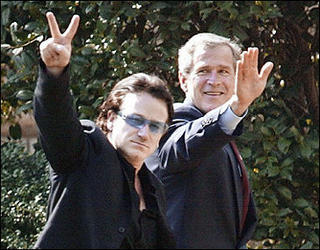 US President George W. Bush(R) and rock star Bono lead singer of U2, walk to the White House after attending an event together in Washington, 2002. Bush sought rock singer Bono’s views over lunch on fighting AIDS and poverty — but don’t look for the Irish U2 frontman to join the US administration, the White House said. (AFP)

U2 Band Leader Bono, met with President Bush at the White House yesterday. After the meeting he was swarmed by media anxious to get his take on Chimpy-BusHitler:

I think the swagger and the cowboy boots come with some humour. He is a funny guy. Even on the way to the bank he was taking the piss. The bulletproof motorcade is speeding through the streets of the capital with people waving at the leader of the free world, and him waving back.

He goes: “It wasn’t always so . . .” — Oh really? — “Yeah. When I first came to this town, people used to wave at me with one finger. Now, they found another three fingers and a thumb.”

So you liked this man?

Yes. As a man, I believed him when he said he was moved to also do something about the Aids pandemic. I believed him. Listen, I couldn’t come from a more different place, politically, socially, geographically. I had to make a leap of faith to sit there. He didn’t have to have me there at all. But you don’t have to be harmonious on everything — just one thing — to get along with someone.

Erik at French blog No Pasaran has much more on the meeting.