ONE MONTH BEFORE ROBERT NOVAK WROTE HIS COLUMN, AMBASSADOR JOSEPH WILSON LAID OUT HIS AGENDA AGAINST THE US ADMINISTRATION AND ISRAEL AT THE LEFTIST 2003 IRAQ FORUM CONFERENCE,
AUDIO HERE
(40:38 in duration)

In this speech, Ambassador Joseph Wilson:

“As I used to say when I was doing my interviews before the war, the issue of weapons of mass destruction is primordial, it is important.”

On June 14, 2003, three months after the start of Operation Iraqi Freedom, Joe Wilson gave a talk to the Leftist organization, “Education for Peace in Iraq Center”.

The American Thinker wrote about this talk previously noting that Joseph Wilson and his wife Valerie Plame were both listed on the program.

Joe Wilson and wife Valerie Plame are listed on the “Education for Peace” website. Here are segments from the talk Joe Wilson gave on June 14, 2003 just three months since the start of Operation Iraqi Freedom:

“Let me just start out by saying, as a preface to what I really want to talk about, to those of you who are going out and lobbying tomorrow, I just want to assure you that American ambassador who has been cited in reports in the New York Times and in the Washington Post, and now in the Guardian over in London, who actually went over to Niger on behalf of the government-not of the CIA but of the government-and came back in February of 2002 and told the government that there was nothing to this story, later called the government after the British white paper was published and said you all need to do some fact-checking and make sure the Brits aren’t using bad information in the publication of the white paper, and who called both the CIA and the State Department after the President’s State of the Union and said to them you need to worry about the political manipulation of intelligence if, in fact, the President is talking about Niger when he mentions Africa.

That person was told by the State Department that, well, you know, there’s four countries that export uranium. That person had served in three of those countries, so he knew a little bit about what he was talking about when he said you really need to worry about this. But I can assure you that that retired American ambassador to Africa, as Nick Kristof called him in his article, is also pissed off, and has every intention of ensuring that this story has legs.

And I think it does have legs. It may not have legs over the next two or three months, but when you see American casualties moving from one to five or to ten per day, and you see Tony Blair’s government fall because in the U.K. it is a big story, there will be some ramifications, I think, here in the United States, so I hope that you will do everything you can to keep the pressure on. Because it is absolutely bogus for us to have gone to war the way we did. (first 2 minutes) 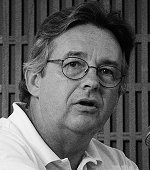 …As I used to say when I was doing my interviews before the war, the issue of weapons of mass destruction is primortive (primordial?), it is important…(at 3:35)

…Going from 1441 to an invasion, conquest and occupation war was not the right thing to do…

… I remain on the view that we will find biological and chemical weapons and we may well find something that that indicates that Saddam’s regime maintained an interest in nuclear weapons…(at 7:50)

…I remember this guys saying these warmongers,… As the sun was coming up I had my flag out there because I am not going to let these a–holes claim that they are more patriotic than I am!…(at 13:20)

…even our military officers were absolutely dismayed at the slaughter we were inflicting on those poorly trained on the way to Baghdad…(at 19:50)

…If you take out some of these countries that are, some of these governments that are antagonistic to Israel, then you provide the Israeli Government with greater wherewithal to impose its terms and conditions on the Palestinian people…(at 20:16)

…By next year,…The pressure here in the United States will begin to build, because by that time Ariel Sharon will have made life so miserable for the Palestinians that they will cross over to Jordan or you will just see a lot of bloodshed. You will see Hamas doing things every day and you will see Israeli gunships in there…(at 27:50)

…As they say in France, people get into politics for money, power and sex. And, most of the rest of the world is the same thing. And maybe here in the states its the same thing, the sex part for Mr. Bush.(at 37:35)

…Wasn’t life simpler when all our president lied about was his sex life? (at 37:45)

The entire speech is 40:37 minutes long. You can be listen to the speech HERE

Also, from the website: He is married to the former Valerie Plame and has four children. (via American Thinker)

It is not shocking that this is not the only place where Joe Wilson and Valerie Plame are listed together. Here is their entry in the “Who’s Who in America” from 2002.

On August 5, 2005 Kevin Aylward from Wizbang found this out about Valerie Plame and Joe Wilson (via Instapundit):

Melvin Schuetz from Baylor’s Moody Library forwarded Joseph Wilson’s bio from the 2003 edition of Who’s Who in America [Volume 2 (L-Z)]. He notes:

So, via Who’s Who, the name “Valerie Plame” has been associated publicly with Joe Wilson since the Clinton era – nice secret… ***

I’m over generalizing here, but it seem like there wasn’t an outing of an agent until two non-secret bits of information were combined.Joseph Wilson’s wife’s maiden name, most would now agree, was not a secret. That Wilson worked at the CIA was not widely known, but it was hardly a secret [See Cliff May at NRO and Just One Minute]. That Wilson’s wife was (or had been) a covert operative was only known to (if reports are to be believed) the Cuban government and perhaps those receiving information form Aldrich Ames, but it was still a secret. Novak puts two pieces of non-secret information together and gets this flashpoint.

But how did that combination “out” a covert agent? It turns out the the Valerie Plame name (remember, according to many commenters her name’s no big deal) was her cover. If her cover name was Valerie Jones how exactly would Novak’s column as it was written have “outed” her? It wouldn’t have. As former federal prosecJosephoesph DiGenoa contends it sure looks like the CIA didn’t exactly bust a nut to “take every conceivable step to protect this person’s identity.”

Update: (Tuesday AM) Bill Hobbs wrote more on Joe Wilson’s speech sponsored by the left-wing anti-war “Education for Peace in Iraq Center” back in September, 2003, and has added perspective, HERE and HERE.

Bill adds these other points from the speech:

* Wilson likens the “Shock and Awe” bombing of selected military and regime targets in Baghdad, done with great care to avoid civilian casualties as much as possible, to the firebombing of Dresden in World War II.

* Iraqis had a reason to not greet American and British troops as liberators.

Bill says (back in 2003) that Joe Wilson was lying about his wife, too.

Tigerhawk explains how Plame’s dispatch of her husband to Niger for drinks was a clumsy plan.
Austin Bay breaks down the Senate Intelligence Report and how Joe Wilson was able to dodge a bullet. Oh,… and this question about beverage selection: The debriefing took place in his own home with his wife (Ms Plame/Mrs Wilson) acting as the hostess. Did she serve coffee? Tea? Bourbon?

Ace goes off on Wilson and the CIA today.

Update: (Wednesday, 11-2-05) Max Boot explains Plamegate’s Real Liar today in the LA Times (via Instapundit). And, Powerline has more on The Evidence and Joe Wilson