Although, Kelvin Ellis was convicted of voter fraud, tax evasion, and pled guilty to obstruction of justice and plotting to kill a government witness, his “running a prostitution ring out of City Hall” charge did not make it to court!

Former Democratic Party Leader and Director of Regulatory Affairs, Kelvin Ellis told the judge that he understood the charges against him and pled guilty on Wednesday, October 12, 2005 to obstruction of justice and plotting to kill a government witness. His trial had been set for today, October 17.

Ellis was already convicted on two other charges in the last 4 months. He was convicted of tax evasion last month. In July, Ellis and four other democratic election precinct leaders were convicted of voter fraud. 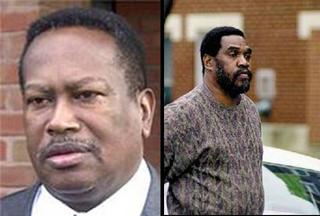 Kelvin Ellis (on left) pled guilty to attempted murder of a government witness. The witness had threatened to expose a prosititution ring Ellis was running out of East St. Louis City Hall. Charles Powell, Jr. (on right) is the Democratic Party Chairman in East St. Louis and was convicted in July with Ellis and three other democratic precinct leaders of voter fraud in federal court.

Ellis was not charged on running a prostitution ring from his East St. Louis City Hall office as prosecutors had alleged.

Ellis, 55, formerly a Democratic Party leader and director of regulatory affairs for the city, has been jailed since January, unable to get bond after a judge found him to be a risk to the community.

Prosecutors had portrayed the witness as a prostitute who also accused Ellis of running an escort service out of his city hall office. She has not been publicly identified, and Wednesday’s hearing shed no new light on the prostitution claim…

…A hidden recorder caught Ellis last fall saying things like, “Do what we can to take her … off the street.”

He also admitted persuading a Democrat precinct committeeman to refuse to answer questions before a grand jury that was convened last fall to investigate vote fraud.

The latest guilty plea wraps up the main prosecutions so far resulting from an investigation of vote buying and other crooked activities in the city. In addition to his day job, Ellis was a precinct committeeman and one of five people targeted and convicted of paying or directing others to pay voters to choose Democrats in the Nov. 2 election.

Just how much prison time Ellis will face remains uncertain because he is awaiting sentencing for three separate crimes. He has a past felony conviction, serving time in a 1990 extortion case linked to his post as executive assistant to Mayor Carl Officer. There were no allegations against Officer in that case or this one.

Kelvin Ellis, a top administrator at East St. Louis City Hall, was indicted in January for plotting to kill a witness in the year long East St. Louis, Illinois federal vote fraud investigation. His indictment laid out a sequence of events that grew more sinister:

According to one of Ellis’ indictments, the investigation began at least a month earlier. A female witness told agents on Oct. 5 that Ellis, “had committed election fraud and other potential criminal offenses.” Ellis learned the same day of the substance of what she had said, the indictment states.

In the following days, Ellis spoke repeatedly with an unidentified person, first discussing plans to discredit the witness, perhaps through a bogus drug sting, court documents say. The indictment includes excerpts of what appear to be recordings of these conversations between Ellis and the other person.

“I want her credibility destroyed,” Ellis is reported to have said. She is “trying to destroy us. No telling what she’s saying.”

As the weeks passed, the conversations turned more sinister, with Ellis saying on Nov. 19, “I want her … taken out, however we have to do it.”

Ellis was shown fake pictures of the woman made by the FBI to look like she had been killed and dropped off at Horseshoe Lake:

In tape recorded conversations with McIntosh, Ellis approves a murder plot against a witness, then agrees to plant crack cocaine on another and acknowledges the operation of a prostitution ring out of City Hall.

The murder plot culminated when FBI agents created a fake photograph of the victim’s body which was shown to Ellis. McIntosh told Ellis the woman was at the bottom of Horseshoe Lake.

Ellis pleaded guilty to obstructing an ongoing federal grand jury investigation by directing two witnesses to refuse to testify before the grand jury concerning their knowledge of election fraud and vote buying committed by Ellis.

This guilty plea means that there have now been at least 16 area Democrats charged and convicted of voter fraud or election irregularities and now 1 conviction of attempted murder in the last year in the St. Louis (Illinois and Missouri) Metro area.