WITH ONE STRIKE LEFT IN THE GAME, PUJOLS BLASTS A THREE RUN HOMER!
VIDEO HERE

ALBERT PUJOLS TALKS ABOUT HIS PRAYER & HIS HOMER HE HIT TO WIN THE GAME!
VIDEO HERE

Down to last strike of the game and series, Albert rescues Cards! 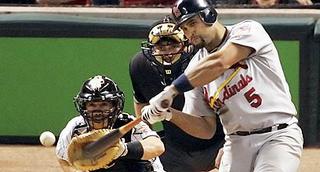 What is certain is that first baseman Albert Pujols began to turn things right-side up with a three-run crush off Houston Astros closer Brad Lidge with two out in the ninth inning. Down 4-2 on one pitch, Pujols’ home run gave the Cardinals a 5-4 win on the next while stealing a celebration from 43,470 set to exult in the first World Series appearance in the Astros’ mostly frustrating 44-year history.

Given the chance for a miracle only because shortstop David Eckstein wedged a two-out, two-strike single between short and third base, and because center fielder Jim Edmonds worked a walk, Pujols answered his own wish.

When Albert Pujols is not out winning Cardinal Series Games in the 9th Inning, Albert and his wife Diedre help orphans and children with Down Syndrome. 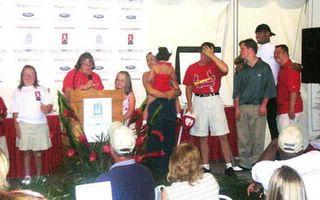 Albert Pujols, in the white shirt, and his wife, Diedre, holding their daughter Isabella, are recognized by representatives of the St. Louis Down Syndrome Association at the Pujols Celebrity Golf Classic in June. (GP Photo)

The Pujols Foundation intends to assist at least three charities the year, with Down Syndrome Research being a priority. Albert and Diedre’s daughter Isabella, was born with the condition.

Sadly, Will in Houston is not so impressed.