The Crimson Tide are having a terrific year and local Hero, Condoleezza Rice will make room in her busy schedule to cheer on her home state team against Tennessee tomorrow!

CONDOLEEZZA RICE IS WELCOMED HOME TO ALABAMA & SPEAKS ON DEMOCRACY & FREEDOM,
VIDEO FROM THE UNIVERSITY OF ALABAMA HERE

After a parade in her honor, a speech at the University, and a Civil Rights Tribute to a childhood friend killed in a church blast as a child, Condoleezza Rice and British Foreign Secretary Jack Straw will attend the Alabama-Tennessee football game on Saturday.

Condoleezza Proclaims The Tide of Democracy is Rolling… 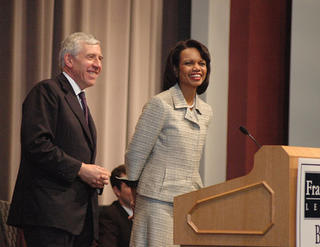 Rice said the city’s history “is evocative of terrorism.” The 1963 killing of four black girls in the bombing of the 16th Street Baptist Church was the deadliest attack of the civil rights era. Rice will attend a ceremony on Saturday marking the murders.

As a youth growing up in England, Straw said he “remembered with horror” watching televised accounts of the brutality experienced by American blacks during the civil rights conflict.

Straw and Rice passed crowds of supporters as their motorcade made its way to the Blackburn Institute at the University of Alabama.

In a speech to hundreds of students and faculty, Rice drew the loudest applause when she shouted, “The tide is going to roll.” The Alabama Crimson Tide is the university’s football team, and Rice and Straw will attend a game on Saturday.

Condoleezza Rice gave another exceptional speech to the delight of her homestate audience as part of the Frank A. Nix Lecture Series at the University of Alabama. Condoleezza weaved into her speech the Civil Rights Movement of her childhood, the great democracy movement we are witnessing in the world today, and the desire of each human being no matter what country, race, sex OR religion to the choices and gifts of democracy. 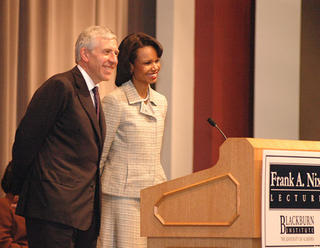 Rice and Straw are planning on attending a Civil Right Tribute and a Tennessee-Alabama football game on Saturday:

Ms Rice was due to take Mr Straw to civil rights sites, including the 16th Street Baptist Church, where four black Sunday school students, one a friend of Ms Rice, were killed in a bombing in September 1963.

In the afternoon, Mr Straw and Ms Rice are to attend the Alabama-Tennessee American football game. Mr Straw might prefer Blackburn Rovers, but gridiron is a passion of his host. She may not want to be President, but she would adore to be National Football League commissioner.

On Friday, Secretary Rice and President Bush urged the UN to take action against Syria for ties to the assassination of former Prime Minister Rafik Hariri.

Earlier this week after the terrific news from Iraq over the weekend and the trial of Saddam Hussein this week, Condi was questioned by the frightening and obnoxious Senator Boxer from California on Capital Hill. California Conservative has more on the brain and tongue lashing of Boxer by Madam Secretary Rice.