Will the UN interfere with the Zimbabwean genocide? 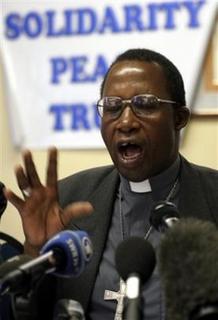 Catholic Archbishop of Bulawayo, Zimbabwe, Pius Ncube, speaks at a news conference by the Solidarity Peace Trust in Johannesburg, Wednesday Oct. 19, 2005. Ncube spoke of atrocities committed against people in Zimbabwe under the rule of President Robert Mugabe. The trustees of the Soldidarity Peace Trust are church leaders of Southern Africa who are committed to human rights and democracy in their region. (AP)

Zimbabwean Catholic Archbishop Pius Ncumbe is at it again! This week he bravely spoke out against the horrific economic decisions of Robert Mugabe. This week he held a press conference and warned that 200,000 Zimbabweans will starve over the next few months due to government policies.

Speaking at the launch of a new film on Operation Murambatsvina, the regime’s recent massive demolition programme, he declared: “I think Mugabe should just be banished, like [Liberian president] Charles Taylor.”

The archbishop claimed that food security in Zimbabwe was now so precarious that he estimated unless there was a dramatic change of policy malnutrition could contribute to tens of thousands of premature deaths by February 2006.

Ncube said that this was a personal estimate based on his estimate of the effect of severe food shortages on a population ravaged by HIV/Aids and extreme poverty at a time of hyperinflation and mass unemployment.

According to Independent Catholic News the archbishop added that 700 people a day were already dying of Aids in Zimbabwe and the present rate would certainly increase with malnutrition. 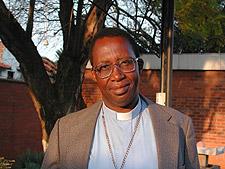 Earlier this year during the March elections, Ncube rallied for Mugabe’s ouster:

The Most Rev Pius Ncube, said that the parliamentary elections on Thursday (back in march) were certain to be rigged. “I hope that people get so disillusioned that people really organise against this government and kick him [Mr Mugabe] out by non- violent popular mass uprising,” said Archbishop Ncube. “As it is, people have been too soft with this government. So people should pluck up just a bit of courage and stand up against him and chase him away.”

Ncumbe’s words were just as strong this week when he spoke out against Mugabe:

The former president of Liberia, Taylor was forced into exile in Nigeria for his part in widespread massacres which have left thousands dead.

“Let the man get banished if you don’t want Zimbabweans to die,” said Ncube, who predicted that thousands will die by February unless there is dramatic change in the situation within Zimbabwe.

The lastest shortage in the country is sanitary towels for women an issue too taboo to be raised in parliament.

Ironically, Robert Mugabe was in Italy this week at a UN Food Progress meeting where was able to take a few swipes at the US and Great Britain. He blamed the British and Americans for the current economic problems in his country (to great applause!).

In the last five years, landless peasants in Zimbabwe have seized white-owned farms in the country, encouraged by the authorities, who later formalised the take-overs into a resettlement programme.

The government has since ended the resettlement programme, with over 3,000 white-owned farms acquired, but in recent months peasants in some parts of the country have been taking over additional farms from white farmers.

Critics have blamed the programme for food shortages, the fall in agricultural exports linked to the prevailing foreign currency crisis in the country.

“Some (white farmers) in those areas have invested in irrigation schemes using foreign exchange to import that infrastructure; have built tobacco barns, imported dairy cows and special milk and beef breeds; imported tea, coffee, flower and fruit bushes for planting using Reserve Bank money which must be repaid, and yet, for some reverse reasoning, we allow these precious investments to be invaded and destroyed,” he said.

“Our hearts at the Central Bank bleed with each story of such levels of economic disregard, such irrationality and such economic sabotage.

Mugabe Maikapa has much more on the sad situation in Zimbabwe.