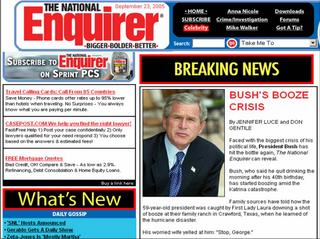 The National Enquirer reported today that after years on the wagon the Katrina Castastrophe has driven George Back to the Bottle!

Bush, who said he quit drinking the morning after his 40th birthday, has started boozing amid the Katrina catastrophe.

Family sources have told how the 59-year-old president was caught by First Lady Laura downing a shot of booze at their family ranch in Crawford, Texas, when he learned of the hurricane disaster.

His worried wife yelled at him: “Stop, George.”

Following the shocking incident, disclosed here for the first time, Laura privately warned her husband against “falling off the wagon” and vowed to travel with him more often so that she can keep an eye on Dubya, the sources add.

That Laura, she’s a keeper!

“When the levees broke in New Orleans, it apparently made him reach for a shot,” said one insider. “He poured himself a Texas-sized shot of straight whiskey and tossed it back. The First Lady was shocked and shouted: “Stop George!”

“Laura gave him an ultimatum before, ‘It’s Jim Beam or me.’ She doesn’t want to replay that nightmare — especially now when it’s such tough going for her husband.”

The news of the levee breaking again today in New Orleans brought George no Southern Comfort. Hopefully, this Mad Dog Beachcomber will fizzle out and won’t be another Bush-wacker!