COLOMBIAN LEADER URIBE IS A HEAVYWEIGHT ON THE WORLD STAGE,
VIDEO HERE 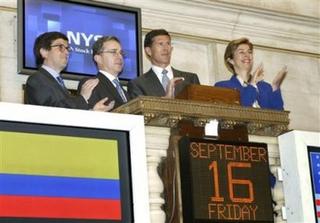 While Venezuelan Marxist President Hugo Chavez was calling the US a terrorist state at a UN speech, Colombian President Alvaro Uribe-Vlez was ringing the bell at the New York Stock Exchange!

A. M. Mora y Leon at Publius Pundit has as wonderful comparison between the two leadership styles in his “A Tale of Two Presidents” today at Publius. I believe A.M. is quite impressed with Alvaro Uribe as you can read for yourself!

His ministers back home were announcing that interest rates would be slashed 50 basis points, nearly a billion more dollars in debt was being repaid, the trade surplus was expanding, tourism was up, banks were lending, remittances were up and the only worry they had – probably unique in Latin America – was that the currency was unstoppably strong and powering upward against the dollar.

What great news from Colombia! Who would have thought it just a few short years ago? In fact, without Publius Pundit’s continuous updates many of us, myself included, would be in the dark about the terrific news coming from Colombia these days.

You’ll have to read for yourself the part on Jesse Jackson’s friend, Chavez, whose disrespect for the United Nations this week in crumpling and throwing a note on the floor telling him that his time was up, ranks up there with the shoe-banging tactics back in the 60’s!

President Uribe also met with U.S. Representatives this week who assured him that his country will continue to recieve assistance this coming year. Uribe outlined his plan to continue to fight drug trafficking and bring peace to his country. Colombia is receiving $563 million in U.S. aid for the fiscal year that ends Sept. 30. The figure approved by the House and Senate for 2006 is $553 million.

Also, this week, Colombia says that it is going to spray herbicide into national parks to rid them of coca. Some environmental groups are up in arms (like the druglords!) but the government has its own environmental reasons:

Interior Minister Sabas Pretelt said spraying the parks would save them from destruction at the hands of drug smugglers, who the government says damage the environment with chemicals used to make cocaine, such as sulfuric acid.

“The government’s duty is not to allow our nature reserves to be wiped out by these ecological criminals,” Pretelt told reporters.

Environmentalists say spraying with the herbicide glyphosate, in a program funded by the US, will damage pristine jungle environments and harm indigenous peoples.

No date for spraying, to begin in parks, has been established.

Two-thirds of Colombia’s 80,000 hectares of coca leaf – the raw material for cocaine – was planted in 13 of the country’s 51 nature reserves at the end of 2004, according to satellite data from the UN.

While spraying has roughly halved the area planted with coca since 2000, more is being planted in nature reserves, where the plants have been safe from crop dusters so far. Coca planting in nature reserves has risen 30 per cent during the past year, Pretelt said.