At this time, state officials, working in conjunction with coroners from local parishes have confirmed 923 deaths. 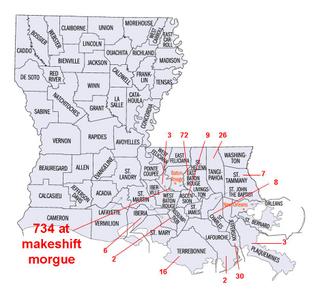 These numbers have been reported to state officials by local coroners. A breakdown of these deaths is as follows:

Of the 923 deaths 32 have been “positively identified” so far (as of Wednesday, September 28) and released to their families, while 340 more have a “presumtive identification” and 291 families were able to be reached to come and confirm the identities.

To date, 340 deceased individuals in the St. Gabriel morgue have a presumptive identification and 32 more have been positively identified and released to their family through a family-designated funeral home. Information about the locations where these bodies were recovered will be added as it becomes available.

The LA Times is making its own presumptive claims about the deaths. saying that:

Many victims lived in low-income areas with poor or haphazard medical and dental care.

Further, the cause of death will be difficult and time consuming for the professionals to determine and witness accounts may be the best bet for many of those who perished:

The best understanding of how Katrina killed so many people will probably have to come from witness accounts and family recollections, not modern science, these experts said. And locating family members, many of whom have been evacuated to other states, will be complex and time-consuming.

The LA Times is clearly upset that officials will make it difficult for the media to assign blame!

Both Cataldie and Dr. Frank Minyard, the coroner of Orleans Parish — where officials believe most of the Katrina deaths took place — said the date of death for most victims would be registered as Aug. 29, the day the hurricane made landfall. That is a departure from procedure in a profession in which precision is normally paramount.

“It could give the false impression that they all died as a result of the storm — and that whatever actions or mistakes were made by local, federal and state authorities didn’t contribute to the deaths,” said Dr. Michael Baden, former chief medical examiner for New York state.

Most of those identified had pre-existing conditions and were from a hospital or nursing home:

Of the 340 corpses that Louisiana officials have tentatively identified, most were recovered from hospitals and nursing homes. Many wore medical bracelets, speeding identification. Almost all of the 32 victims identified by state officials were found in nursing homes or hospitals, Cataldie said.

In most of those cases, he said, preexisting medical conditions contributed to the deaths during the trauma of trying to survive the storm and flooding.

The Boston Globe (AP) makes it sound as if animals gnawing on the bodies was commonplace:

In addition, dental records in New Orleans, in many cases, are destroyed or at least inaccessible, Cataldie said. Also, animals have been feeding on the bodies, making fingerprint identification harder.

Few children were killed in the disaster:

Dr. Cataldie discounted reports that large numbers of children’s bodies had been recovered. “There have been some children, but thank God, there haven’t been that many,” he said.

As far as the rumors of murder…

The bodies of murder victims are sent back to the parish coroners’ offices. Cataldie said only six or seven of the bodies at the St. Gabriel morgue were murder victims, primarily from New Orleans.

Despite reports of multiple beatings and throats slit at the convention center and Superdome in New Orleans, the Department of Health and Hospitals said only two bodies found at those evacuation sites were believed to have been murdered. They had gunshot wounds. Ten bodies were recovered from the Superdome and four from the convention center, Cataldie said.

(This report does not mention that the two murder victims at the Superdome and Convention Center were believed to have been brought there.)

NOLA and the AP fail to mention this information that was shared at the press conference:

Ten corpses were recovered from the Louisiana Superdome and four from the city’s convention center, all of them adults, Cataldie said. But contrary to published reports of murders inside those facilities, he said, none of the cases involved homicide.

More on the nursing home deaths:

The attorney general is looking into whether nursing homes or hospitals mishandled evacuations of patients, abandoned them during Hurricane Katrina, or euthanized people to spare them further pain when rescuers didn’t arrive.

The owners of a St. Bernard Parish nursing home where 34 patients died in Hurricane Katrina’s floodwaters have been charged with negligent homicide, and Kris Wartelle, with the attorney general’s office, said 13 nursing homes and four hospitals were being investigated because of patient deaths.

Wartelle said while the office was investigating reports of euthanasia, none were confirmed.

Cataldie and DHH didn’t have the number of bodies recovered from hospitals or nursing homes, and they didn’t have a breakdown of how many bodies were found in each pa
rish affected by Katrina. But Cataldie said the vast majority of corpses had been found in New Orleans.