From the comments section below…

…”I am an old girl. I once ‘graced’ the jungles of Vietnam and was face-to-face with the devils of war. I understand what it is. I still have it in me to fight,… someway, somehow. I pray for Our President, Our Country, Our People and for those in distant lands who struggle for the same rights and freedoms we have.
Remember? I will never forget. Neither will others… we are just a little quiet right now. So – let’s roll.”

“THE FLIGHT THAT FOUGHT BACK”
PREVIEW HERE

“The terrorists that took over Flight 93 planned for two years and thought they had planned for everything, except this…” 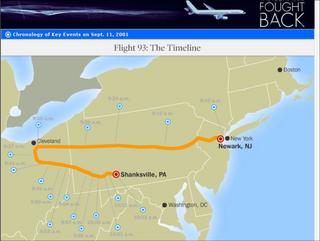 Today is the 4th Anniversary of 9/11 Attacks on our country. I will never forget being on a conference call with colleagues from Arizona, Iowa, Pennsylvania, and Chicago on that day. It was surreal situation and useless to think we would achieve anything that morning in our discussions when others in the room over were watching on an office television the Twin Towers turned into dust. Every few minutes our friend from Iowa would give us an update on the massacre of innocent Americans from the Chicago Tribune website which was the only site she was able to link to.

I also think of my nephew today on his birthday. On September 11th, 2001, he was a student at the University of Iowa. Today he is a member of the US Coast Guard stationed in Galveston, Texas. Happy Birthday, Nick!

Passengers and Crew:
May They Rest in Peace

Update: Lorie Byrd at Polipundit, Michelle Malkin, Glenn Reynolds the Instapundit, uncanny with his analysis back on that day (when he was blogging and I had never heard of him or blogs for that matter!), Winds of Change, Ace of Spades… now this is some news, Blackfive, Mudville Gazette, Lucianne, Little Green Footballs, The Jawa Report says Al Qaeda is planning another attack, RedState, Trey Jackson, and Scared Monkeys has the pictures you can never forget. GOPinion, The Anchoress, Betsy’s Page , California Conservative and Publius Pundit have more. Cox and Forkum have an exceptional post remembering the heroes from the tragedy.