Thailand extremists claim they are receiving financial backing from Saudi Arabia and Malaysia; while 5 Al Qaida members are arrested after a gunfight in Somaliland.

The self-proclaimed leader of Islamic separatists in Thailand, Lukman B. Lima, threatened the government of Prime Minister Thaksin with continued violence if the authorities continue their crackdown in the restive southern provinces of Pattani, Narathiwat, Yala and parts of Songkhla. Lukman B. Lima, who currently resides in Sweden, was recently interviewed in Indonesia and says the Thai Muslim groups have been receiving financial assistance from Saudi Arabia and Malaysia:

A veteran leader of Thailand’s insurgency has issued a warning: militants from Indonesia and Arab nations might join the fight for a separate homeland if the Thai government continues a crackdown that’s provoking a new generation of Muslim fighters.

In his first interview with a news organization, Lukman B. Lima told The Associated Press that violence could spread from Thailand’s southern provinces to the capital unless the government accepts an offer to negotiate an end to the conflict.

“If the government opts to kill and kill without reason, perhaps fighters from Indonesia and Arab countries will help us because, according to Islam, real Muslims cannot just stand by when their brother Muslims are being slain,” he said.

The 21-month-old insurgency — in which more than 1,000 Muslims and Buddhists have been killed — is getting moral and financial support from abroad, especially from Islamic sympathizers in Malaysia and Saudi Arabia, according to Lukman. But weapons have been obtained locally and wielded by Thai Muslims, he said.

Lukman is vice president and acting head of the Pattani United Liberation Organization, or PULO, one of several groups involved in the century-old struggle to gain independence for the predominantly Muslim far south of Thailand, a Buddhist country. 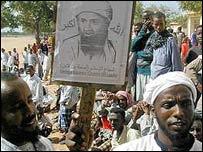 Meanwhile in Somaliland, the breakaway province between Ethiopia and Somalia, police captured 5 Al Qaida militants and a cache of weapons after a shootout. Police had been monitoring the group since they moved into the region from lawless Somalia, a country seen as a safe haven for Islamic extremists:

Three police officers and one suspect were wounded in the overnight clashes at the houses in Somaliland’s capital of Hargeisa.

Authorities were monitoring the suspects as they moved into the region from southern Somalia and the Somali capital of Mogadishu for some time before the intelligence department called for a raid, Ilmi said.

They are accused of planning to kill senior government officials and some prominent foreigners in an effort to destabilize Somaliland during the run-up to parliamentary elections scheduled for next week, Interior Minister Ismail Adan Osman said on Somaliland’s official Web site.

In July, a Brussels, Belgium-based group that tracks conflicts around the world said a new and ruthless cell with links to al-Qaida has grabbed a foothold in Somalia’s capital.

Somaliland set up its own administration after breaking away from the rest of Somalia when the Horn of Africa nation descended into anarchy because of clan-based fighting following the 1991 ouster of President Mohammed Siad Barre.

Somaliland remained relatively peaceful, aided by the overwhelming dominance of a ruling clan and an economic infrastructure left behind by British, Russian, and American military aid programs.