The Russian official says he is not afraid of Tyson biting his ear. 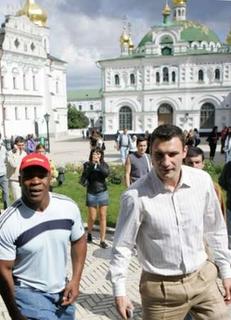 U.S. boxer Mike Tyson is shown around the Kiev Pechersk Lavra (Monastery of the Caves) by Ukranian boxer Vitali Klitschko (R) during a visit to Kiev September 3, 2005. (Reuters)

Russian ultra-nationalist, Vladimir Zhirinovsky, is planning on telling Mike Tyson to pack his bags and move to Russia because of hurricane Katrina and the looming demise of the entire West Coast:

Zhirinovsky, a Russian Nationalist, said at a news conference he will also offer the former heavyweight champion, who arrived in Moscow on Monday, condolences on the death and destruction caused by Hurricane Katrina.

Zhirinovsky and Tyson are scheduled to meet Tuesday in a Moscow restaurant. Zhirinovsky told reporters he is not afraid of Tyson biting his ear. One of the most infamous moments in Tyson’s career came during a bout in Las Vegas in 1997, when he bit off part of Evander Holyfield’s ear.

Mike Tyson has not announced what he plans to do during his visit to Moscow yet. It is unclear how how long he plans to stay and why exactly he is in Russia.

Update: (Wednesday) Mike wasn’t feeling well and blew off the meeting with the minister. There is no word if Mike accepted the minister’s invitation to come live in Russia.