MISSOURI SENDS A SEARCH AND RESCUE TEAM TO ASSIST IN NEW ORLEANS.
HERE IS A VIDEO CLIP OF THEIR DRAMATIC RESCUE WORK. 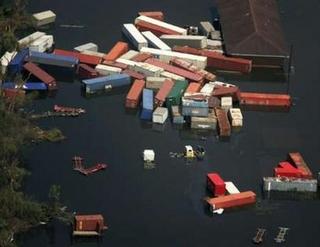 The Missouri National Guard also pulled into New Orleans to assist with the aftermath of Hurricane Katrina:

Missouri’s National Guard MPs pulled into a shattered suburb Sunday, called a high school home and prepared for a wave of anxious residents who get to see their homes for the first time today.

“It’s going to be a challenge for them,” said Maj. John Benson of Ballwin, operations officer of the 175th Military Police battalion. “They will have no water, no power, no food. There will be no traffic lights. Getting them through will be our challenge.”

The 560 members of the 175th stationed themselves at East Jefferson Parish High School in Metairie, the main suburb just west of New Orleans. The neighborhood, being near the Mississippi River, is high enough that floodwater from Lake Pontchartrain did not reach it. But there is more than enough wreckage without it.

Sections of exterior wall and roof are ripped from the school, and its gymnasium remains flooded with 2 inches of rainwater. The live oak trees in its small quadrangle are shorn of limbs.

Members of the 131st Missouri National Guard are setting up a triage center in St. Louis to support the evacuees coming to St. Louis. 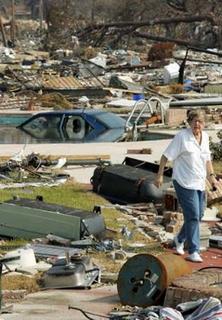 Polly Kyser looks for some of her belongings in Long Beach, Mississippi on Monday. (Reuters)

** And, remember you can still donate HERE to Catholic Charities or select another charitiy of your choice HERE. And, register your donations HERE. **

A proud mother from St. Louis writes in:

Master Sgt. Amy Burkett-Quinlisk and the 131st Fighter Wing from Missouri Air National Guard are awaiting a call from President Bush on when and where they will be deployed. She is anxious to go and help wherever she and her unit are going. A very proud mother.