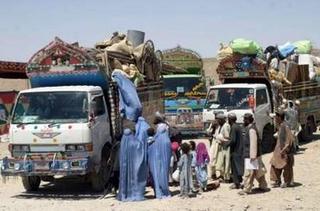 Afghan refugees prepare to leave a refugee camp on their way back to their home country near the western Pakistani city of Quetta September 3, 2005. (Reuters)

Afghanistan has urged Pakistan not to force any refugees to return home to Afghanistan:

“This is our request to the government of Pakistan to continue its hospitality as it did in over two and half decades and not to pressurize refugees to return,” Presidential spokesman Mohammad Karim Rahimi told journalists at a news briefing here.

Pakistan last month asked Afghan refugees, particularly those living in Bajaur and Karam close to Afghanistan, either to return home or shift to other camps by the end of August.

Around 45,000 refugees have returned home since the issuance of order while thousands of others have been taken to other camps inside Pakistan.

“While we are grateful to the people and government of Pakistan for hosting millions of Afghan refugees in over the past two and half decades, we request them at this time to help facilitate the voluntary repatriation of remaining refugees living there,” Rahimi added.

Over 2.5 million Afghan refugees have returned home since the collapse of Taliban in late 2001 and some two million others are still living there. 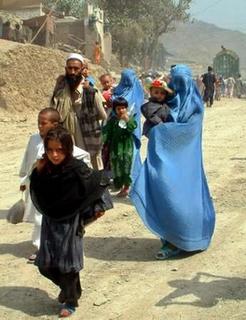 Pakistan extended a deadline for the closure of Afghan refugee camps in a rugged tribal region as more than 100,000 refugees are still being processed for repatriation. About 2.5 million Afghans have returned home from Pakistan since U.S.-led forces overthrew Afghanistan’s Taliban government in 2001, but more than three million remain. (Reuters)

One mob of angry refugees attacked a UN office last week in a “protest” in the delays in processing them.

Khan said police had to disperse the crowd of between 300 and 600 at the registration centre, which is processing thousands of refugees who have been ordered to leave Pakistan by mid-September.

“They did not give us any reason,” he said on Thursday. 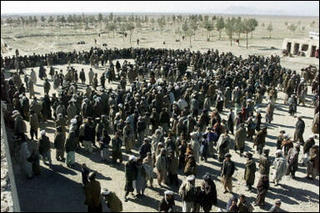 Hundreds of Afghan refugees attacked a United Nations refugee agency office in northwest Pakistan today in protest at delays in repatriating them. (AFP)