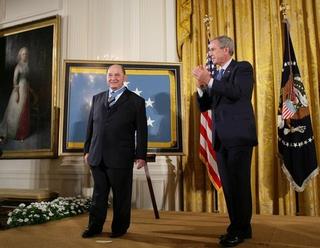 President George W. Bush applauds Korean War era veteran Corporal Tibor “Ted” Rubin, after awarding Rubin the Medal of Honor, Friday, Sept. 23, 2005 at cermonies at the White House in Washington. Rubin was honored for his actions under fire, and his bravery while in captivity at a Chinese POW camp. (White House)

Here is his courageous story:

Born in Hungary in 1929, Ted and his family were rounded up by the Nazis and taken to concentration camps when he was just 13 years old. He was taken to Mauthausen Camp in Austria, where an SS officer told the prisoner, “You, Jews, none of you will ever make it out of here alive.” And many did not. Before the war was over, both of Ted’s parents and one of his sisters were lost in the Holocaust. Ted Rubin survived the camp for 14 months, long enough to be liberated by U.S. Army troops on May the 5th, 1945.

These American GIs gave Ted his first real taste of freedom. Their compassion for the people in the camp made a deep impression on this teenage survivor. It was his first experience with soldiers who were fighting to protect human life. That day Ted made a promise to himself, if he ever made it to America, he would show his appreciation to this great land by enlisting in the United States Army. He did move to America after the war, and the young immigrant made good on his pledge. Even though he was not yet a citizen, he volunteered to serve his new nation in uniform, and seven months after taking the oath of a U.S. soldier, he was sent to Korea.

The conditions were brutal, the fighting was intense, and the bitter cold was unrelenting. And it was in these grueling circumstances that Corporal Rubin impressed his fellow soldiers in the 1st Cav Division as one of the best ever to wear our nation’s uniform.

One night near the Pusan Perimeter, Corporal Rubin had been assigned to hold a hill that was essential to the 3rd Battalion safe withdrawal. For 24 hours this lone rifleman would defend the hill against an overwhelming number of North Korean forces. By his actions Corporal Rubin inflicted heavy casualties on the enemy, saved the lives of countless soldiers, and gave the unit time to withdraw.

As a teenager, Ted had taught himself how to survive the horrors of a Nazi death camp. He was resourceful, courageous, and unusually strong. And in Korea, he drew on these qualities to help keep many of his POWs alive. Whenever he could, at the risk of certain execution, Corporal Rubin would sneak out and steal food rations from the guards, and then he shared them with his fellow soldiers. Throughout this ordeal he nursed those who were sick back to health, and said the Kaddish prayers for those he buried.

And when his captives offered to release him to Communist Hungary, with the guarantee of a good job and nice clothes and plenty of food, Corporal Rubin refused. He said, “I was in the U.S. Army, and I wouldn’t leave my American brothers because they need me here.” Ted’s decision was in character.

As a Jew and non-citizen serving in uniform, he had experienced prejudice in the Army. And he knew that the America he fought for did not always live up to its highest ideals. Yet he had enough trust in America’s promise to see his commitment through. He saw it as his personal duty to live up to our nation’s promise, and by doing so he set an example of what it means to be an American.

Many heroes are remembered in monuments of stone. The monuments to Corporal Rubin are a legacy of life.

Jason at Iraq Now was not pleased with the coverage of this awards ceremony by the New York Times.