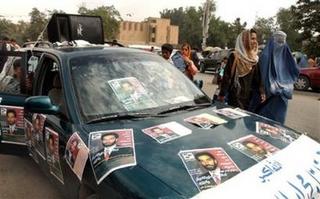 Afghan women pass by a car decorated with election posters of Aboul Ahrar Ramzpoor a candidate for the upcoming election, during his poster distribution campaign in Kabul, Afghanistan, on Thursday, Sept. 8, 2005. Afghanistan completed the first stage of introducing democracy after two decades of civil war by holding its presidential election on Oct. 9, 2004. The parliamentary election is another crucial step toward democracy, scheduled for Sept. 18. (AP)

Afghan officials are struggling with the “warlord issue” two weeks before the parliamentary elections:

The Elections Complaints Commission is reconsidering whether 21 candidates should be disqualified for being warlords or having links to illegal militias. With ballots already printed for the Sept. 18 vote, any further disqualifications would have to be posted at polling stations to warn voters away from wasting their vote.

Since coming to power, the central government, headed by US-backed President Hamid Karzai, has gingerly tried to disarm and remove warlords from their bases of power – and met with some success. Analysts fear that the parliamentary election could be a setback to those efforts if warlords or their surrogates are allowed to wield their influence within the corridors of Afghanistan’s fledgling legislature.

“Many who abused human rights in the past continue to abuse human rights and traffick in drugs from positions of power today,” says Joanna Nathan, senior analyst for International Crisis Group in Afghanistan. “Many are now seeking the mantle of a democratic mandate. This should in no way exempt them from prosecution or other means of justice as determined by the Afghan people.” 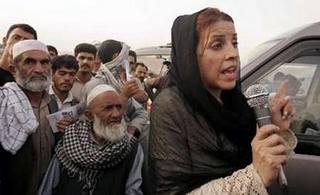 Some Afghanis don’t know quite what to think of Sohaila Alkozai, a female candidate in the upcoming parliamentary elections on September 18th as she campaigns in Kabul. (Reuters)

Running for office can be a very dangerous proposition in Afghanistan. The Taliban claims it killed one candidate earlier this week:

An election candidate, senior district official and three others have been kidnapped and killed in southern Afghanistan, a Taleban spokesman says.

Spokesman Abdul Latif Hakimi said Kandahar candidate Khan Mohammad and the others had been shot, although there is no independent confirmation.

The Taleban has increased attacks ahead of parliamentary polls on 18 September.

More than 1,000 people have died in militant-linked violence in southern Afghanistan this year.

Mr Hakimi said the five kidnapped men had been shot following a decision by a Taleban council.

Mr Mohammad was standing for the Kandahar provincial council.

Another candidtate in eastern Afghanistan had his house attacked by militants this week. 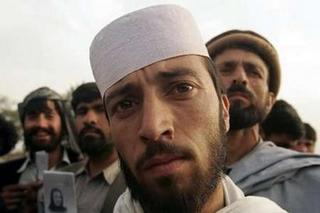 Afghans listen to Sohaila Alkozai, a candidate in the upcoming parliamentary elections, talk at a meeting with men in Kabul September 7, 2005. (Reuters)

Karzai’s Opposition is ramping up the rhetoric before the September 18th elections:

The head of Afghanistan’s opposition said on Wednesday President Hamid Karzai was a weak leader and a new parliament, to be elected on Sept 18, would have to improve government policy across the board.

Yunus Qanuni a former interior minister and education minister in Karzai’s transitional government and runner-up to Karzai in last year’s presidential election, said he and his allies expected to win up to 50 percent of parliament seats.

‘Afghanistan faces a leadership crisis, the main crisis is the weakness of the leadership,’ Qanuni told Reuters in an interview at his home in the northern outskirts of Kabul.

‘These are the priorities which parliament should debate and help the government move towards improvements.’

Not that Karzai had much to work with when he got the job! 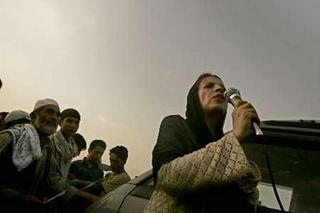 Sohaila Alkozai, a candidate in the upcoming parliamentary elections, talks at a meeting with men in Kabul September 7, 2005. Parliamentary and provincial elections will be held on September 18. This is the last step of an international plan meant to restore democracy and stability to Afghanistan after 25 years of conflict, and only four years after U.S.-led forces ousted the Taliban. (Reuters)