Remember this? Not your Parade of Roses! 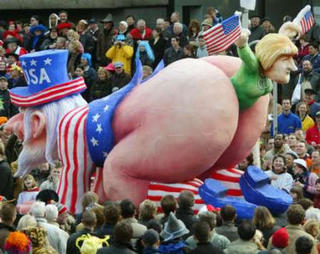 Polls open at 0800 (0600 GMT), and with up to 25% of voters still undecided the main parties say they will keep campaigning right to the last minute.

The country’s sluggish economy, high unemployment, and foreign policy have been the election’s main themes.

Although polls give Mrs Merkel’s CDU party a significant lead over Mr Schroeder’s Social Democrats (SPD), her hopes of becoming Germany’s first woman chancellor may depend on whether she can form a coalition.

During his seven-year stint, Germany’s jobless total has risen above five million, and remains at more than 11%, she said.

“We will not make false promises about how to get Germany moving again,” the physicist from the former communist east said.

“Vote for change because Germany needs a future.” 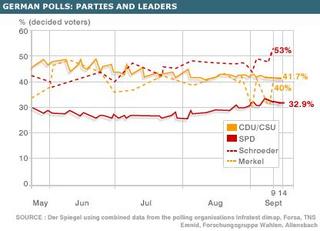 Davids Medienkritik will be the blog to follow the next 24 hours on the German Election. Davids also breaks down the German election to you which is much different than an American Presidential Election.

Update: (Sunday 11:30 AM CST) The party of Angela Merkel appears to be winning which is wonderful news for the US and the Germans as Schroeder has kept the country into economic stagnation. Good for Angela, she has also had to fight a brutally biased German media. Medienkritik, however, is not so pleased.

Update 2: (11:00 PM Sunday CST) Davids Medienkritik sums the election up with this…

The reason that the SPD still looks like a winner despite it all is explained by the low expectations on Schroeder and the high expectations on Merkel. Merkel clearly underperformed and also lost votes and Schroeder indeed had a strong surge at the end. But this SPD loss is still a loss and sober political reality will govern Germany’s unclear and divided future.

See Davids Medienkritik for the complete update.
Instapundit notes that “crapulent politics” did not work for Schroeder.
French Blogger No Pasaran has thoughts on the election outcome.
And, Bare Knuckle Politics sends a link.