I WONDER WHAT KANYE WEST WOULD SAY ABOUT THIS?

Anthony Geeck lives in Fenton, Missouri and owns property and has family in (from) New Orleans. He has about 20 people from New Orleans living with him now, and he is upset about the Katrina media coverage. (from “Allman and Smash in the Morning” on 97.1 FM Talk Radio)

You can listen to his story, something you may have missed in the mainstream news, from his morning show segment HERE. 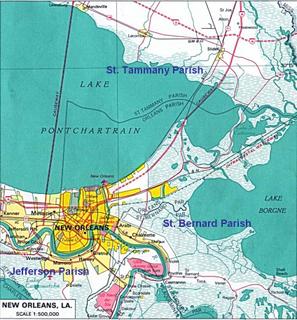 Anthony Geeck: St. Bernard, Jefferson, and St. Tammmany are all 90% white bedroom communities. St. Bernard was hardest hit in the hurricane. It was over 5 days before the Federal Government showed up. The Feds don’t know we exist. It should have been the governor who said “Hey, we haven’t heard anything from St. Bernards”. We were totally inundated. Over 95% of all of the housing was underwater.

The Canadians made it to help us out before the Federal Government.

When Blanco said we have to get everybody out of New Orleans, that’s fine. But, what about some of the surrounding areas? She should have said I need some help over here. We managed to get 15-17 thousand out on our own. I’m talking about able bodied men. If the Federal Government can’t get there then we need to get the local resources out. It would be like ignoring Ladue (a white St. Louis suburb) and focusing on St. Louis City. All of New Orleans is 70% white. The city itself is 63-70% black. But, the Metro New Orleans area is over 70% white.

What really bothers me is that over a week into this thing they were saving pets in the predominantly black neighborhood. My house is only five miles from the French Quarter. It’s not like some remote fishing village like they try to portray us. 66,000 people live in my parish. It’s the 18th largest parish in Louisiana. They’re picking up pets in the city and I still have people in the attics trapped waiting on roofs for someone to come rescue them…

…If you look at a satellite map you can see that a bus could have easily drove through the (shallow) water to get to the SuperDome. All of the routes were open.

The people of Jefferson Parish did not let a group of blacks into the suburbs who were carrying guns. It turned into a big fire fight and was all over the news but the people in that parish were not going to let anyone into the parish carrying guns.

Jamie Allman: So all we heard about on the news is how the blacks were suffering and Tony is telling us that hey, we didn’t get any help either. And, so the federal government had an equal opportunity inaptitude in this case. At the same time you have to give some blame to the local government who have to pinpoint who needs help.

Anthony Geeck: Right now we are actually below 20 (in his house in St. Louis). Midwesterners have been great. St. Louis has been great. I’d like to thank the neighbors have been coming in and cooking. The local nurses are coming into check on my Mom who has a condition. Everyone has been great here. We have people in our house who lost their homes. My rental property went under. Hopefully a couple of them will be able to go back, do repairs and work a job.

Jamie Allman: Well, Anthony Geeck thank you for writing, for coming on the show, and for widening out views. Our prayers are with you.

Smash: Do you think in this kind of a situation white people are afraid to speak out?

Jamie Allman: Well, yeah, it makes you look racist, like you don’t care. But, eventually that is what the problem is with this story. Even as the media grows tired of reporting on the story, they’re still not going to cover this part of the story.

Check out Allman’s Electric Stove where “Allman and Smash” fans can continue to “simmer and sizzle”.

A new Associated Press-Ipsos Poll was just released tonight. And, all of the images of suffering black people inside New Orleans has affected the attitudes of the American people:

Like bands of the storm itself, Katrina’s reach in American life is vast: 1 in 3 Americans believes the slow response will harm race relations. Two-thirds say surging gas prices will cause hardship for their families. Half say the same of higher food prices.

One of them is Sue Hubbard of Hueytown, Ala., 64 years old. She does not believe race played a deliberate part in who got out of New Orleans, but she is deeply worried about tensions inflamed by those who do.

“I just think it took everybody by surprise,” says Hubbard, who is white. “I don’t care if it would have been the president himself, they couldn’t have gotten there to those people. Some people — not everybody — are trying to make a racist thing out of it.”

It’s just a shame that the mainstream news created this. It does not necessarily reflect the reality on the ground.