Motorists line up for gas in Indonesia, home of Southeast Asia’s largest economy… 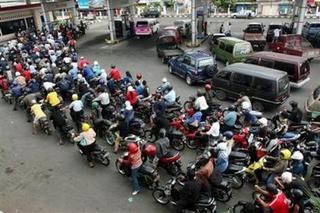 Motorists queue up to fill their tanks at a gas station in Yogyakarta, Central Java, Indonesia, Wednesday, Sept. 28, 2005. Indonesia braced for street protests Wednesday after parliament approved a government plan to raise fuel prices that for decades have been among the lowest in the world. (AP)

Thousands of people rallied across Indonesia to protest a raise in the price of gas:

Thousands of students, truck drivers and laborers rallied across Indonesia on Thursday against impending fuel price hikes, some blocking roads with burning tires and throwing stones outside a house belonging to the vice president.

In one incident, police fired warning shots and beat protesters with batons after a rowdy crowd tried to storm a gas station, witnesses said.

The government’s decision to cut fuel subsidies that have helped protect Indonesia’s poorest from spiraling global prices could result in a 60 percent rise in the price of gasoline, diesel fuel and kerosene when it takes effect Saturday, ministers say.

Though the move will help ease pressure on the cash-strapped government’s budget, it is also expected to push up the price of everything from rice to bus fares to cigarettes in the sprawling country of 220 million people, half of whom live on less than US$2 a day.

Indonesia has Southeast Asia’s largest economy. And, nowhere is the extent to which high oil prices are complicating efforts to raise living standards more apparent than in Indonesia. 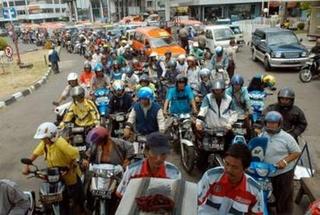 Motorists line up to get fuel in a petrol station in the Indonesian city of Semarang, central Java province, September 27, 2005. Indonesia’s President Susilo Bambang Yudhoyono said last week he planned to raise fuel prices on October 1. He has little choice but to gradually wean Indonesians off Asia’s cheapest gasoline, even though the politically risky move is sure to spark street protests across the world’s most populous Muslim nation. (Reuters)

Meanwhile, the US is offering a grant to Indonesia to develop natural gas deposits:

The United States has given Indonesia’s state gas company a grant of $487,000 to develop the use of natural gas as a stable source of fuel, officials said on Monday.

“We will use the funds to make a feasibility study of a distribution system for compressed natural gas (CNG) in Indonesia,” PGN president director W.M.P. Simandjuntak told reporters.

“The use of CNG in Indonesia will certainly cut oil product imports in future. This is important for Indonesia,” he said.