President Bush, who has been under constant attack for assumed failures to the Hurricane Katrina disaster, answered his critics today in New Orleans. The actual federal response to Katrina, even though unreported, has been unprecedented and historic. The death toll from the hurricane remains around 400, far short of the 10,000 originally estimated by New Orleans Mayor Nagin. 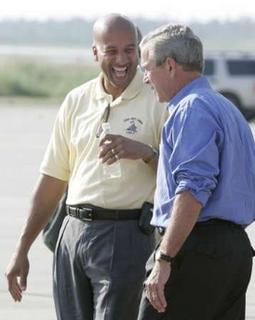 U.S. President George W. Bush greets New Orleans mayor Ray Nagin (L) after arriving in New Orleans, September 11, 2005. Bush is visiting the area for the third time since the hurricane slammed into Louisiana, Mississippi and Alabama. An estimated one million people have been displaced from their homes in the Gulf states since Katrina hit on August 29. In Louisiana, the official death toll stands at 154. Mississippi, the other hardest hit state, had 211 confirmed killed. There were also fatalities, though much lower numbers, in Alabama and Florida. (Reuters)

President Bush made his first visit to New Orleans since Hurricane Katrina and broken levees ravaged the city. Bush was accused of being racist in his follow up to the disaster by Democratic Party Leader Howard Dean and rapper Kanye West. The media has already blamed the federal government for mistakes made following the hurricane and has ignored the responsibilities of local and state officials:

Bush made the remarks to reporters at the end of a tour that took him through several flooded New Orleans neighborhoods. Occasionally, Bush had to duck to avoid low-hanging electrical wires and branches.

It was Bush’s first exposure to the on-the-ground leadership of his new hurricane relief chief. The federal response to the disaster has been roundly criticized as sluggish and inept.

Unlike the portrayals in the media, the federal response to Hurricane Katrina has been monumental and historic (via Lucianne):

Jason van Steenwyk is a Florida Army National Guardsman who has been mobilized six times for hurricane relief. He notes that:

“The federal government pretty much met its standard time lines, but the volume of support provided during the 72-96 hour was unprecedented. The federal response here was faster than Hugo, faster than Andrew, faster than Iniki, faster than Francine and Jeanne.”

For instance, it took five days for National Guard troops to arrive in strength on the scene in Homestead, Fla. after Hurricane Andrew hit in 2002. But after Katrina, there was a significant National Guard presence in the afflicted region in three.

Journalists who are long on opinions and short on knowledge have no idea what is involved in moving hundreds of tons of relief supplies into an area the size of England in which power lines are down, telecommunications are out, no gasoline is available, bridges are damaged, roads and airports are covered with debris, and apparently have little interest in finding out.

So they libel as a “national disgrace” the most monumental and successful disaster relief operation in world history.