Lewthwaite, who gave birth to the couple’s second child just over two weeks ago, said she wept when anti-terrorist police showed pictures of Lindsay on surveillance film in the run-up to the bombings.

She was taken to a safe house by police for her own safety but said she hoped that society would not reject her for what her husband had done.

Convert widow, pictured below with her two week old baby, does not know what she will tell his two sons. 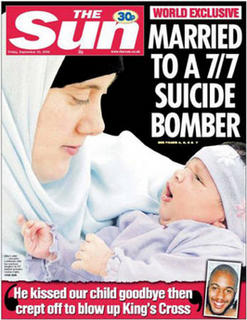 The front page of British newspaper, The Sun, is seen September 23, 2005. The paper carries an exclusive interview with Samantha Lethwaite, the widow of Germaine Lindsay, one of the suicide bombers who killed 52 people in attacks on London’s transport system on July 7. (Reuters)

The widow of Germaine Lindsey says the radical mosque poisoned her husband’s mind:

Samantha Lewthwaite, the wife of Jamaican-born Germaine Lindsay who killed 27 people on an underground train near King’s Cross station, said he had become twisted by fanatics he had met toward the end of last year.

“The killing of innocent British civilians by Jamal (Lindsay) was something I could never comprehend,” she said in an interview with the Sun newspaper.

“How these people could have turned him and poisoned his mind is dreadful. He became a man I didn’t recognize.”

“He was so angry when he saw Muslim civilians being killed on the streets of Iraq, Bosnia, Palestine and Israel — and always said it was the innocent who suffered,” said Lewthwaite, a Muslim convert like Lindsay.

“Then he is responsible for doing the same thing — but to his fellow British people,” she added, saying she “totally abhorred” his actions.

Lindsay’s behavior had become increasingly erratic in the weeks running up to the attacks, and Lewthwaite, who was eight months pregnant when Lindsay carried out the bombing, believed he was having an affair.

She told the paper she had ordered him out of their house just hours before the attacks. But she said she believed he had returned to say goodbye to his son Abdullah, now 17-months-old. 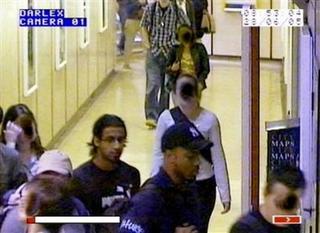 London bombing suspects (L-R) Mohammed Sidique Khan (obscured), Shahzad Tanweer and Germaine Lindsay (in hat) at King’s Cross Underground station in central London. Three of the London suicide bombers staged a dry run on June 28, 2005 to the capital just over a week before they blew themselves up on the transport network and killed 52 commuters. (Reuters)

Three of the four bombers made a practice run days before they killed themselves and 52 other people:

Police released photos of the three men, wearing jeans and baseball caps and carrying backpacks, arriving at the Luton train station and the Kings Cross train and subway stations in London on June 28.

They apparently were following the same route they took on July 7 when they mounted the deadliest attack on British soil since World War II; in addition to the deaths, 700 people were injured.

Hasib Hussain, who police believe detonated a bomb on a double-decker bus on July 7, was not seen in the surveillance photos released by police Tuesday.

Khan, Tanweer and Hussain were British citizens of Pakistani descent; Lindsay was a Jamaican-born resident of Britain.

In a videotaped message aired on al-Jazeera Monday, Ayman al-Zawahiri, the No. 2 number official in the al-Qaeda terror network, said al-Qaeda was responsible for the attacks. Earlier messages from al-Zawahiri had praised the attack but stopped short of claiming responsibility for al-Qaeda.