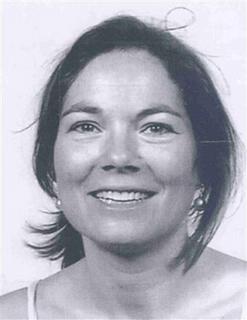 This undated file photo released by the police shows Claudia Melchers, Armed men broke into an upscale Amsterdam home and kidnapped Claudia Melchers, 37, the daughter of multimillionaire Hans Melchers, owner of Melchemie Holland BV, which had supplied chemicals to Iraq in the 1980s, police said in Amsterdam, Netherlands, Tuesday, Sept, 13, 2005. She was released earlier today and details of her abduction are pending investigation. (AP)

The daughter of the Dutch man accused of selling chemicals to Saddam Hussein to build his arsenal of chemical weapons was kidnapped in The Netherlands on Monday. She was released earlier today and details are pending investigation:

Melchers, who runs a catering company, is the daughter of Hans Melchers, who owns Melchemie Holland BV, which supplied chemicals to Iraq in the 1980s. It was unclear whether the kidnapping was related to the company’s business dealings.

The woman’s two young children were left in the house in a southern Amsterdam neighborhood, police said. The kidnappers bound and gagged a neighbor who was in the house, and he was later freed by one of the children.

“At this moment we don’t know where she is,” police commissioner Willem Woelders told Dutch NOS television. “Anybody who has information about where she is should contact us so we can get her home safe.”…

…The daughter of a multimillionaire has reported been freed unharmed after a dramatic kidnapping on Monday.

Police and just officials were tight-lipped on Thursday morning and would not give details about where Claudia Melchers was released and whether a ransom was paid. A press conference is scheduled for Thursday afternoon.

Hans Melchers is the owner of Melchemie Holland, a wholesale business trading in artificial fertiliser and chemicals. Melchers was in the news previously for allegedly selling chemicals which were used by Saddam Hussein to make poison gas.

Melchemie Holland BV has denied allegations that it deliberately violated export restrictions by shipping chemicals to Iraq, and said it recalled the goods before they reached the country.

Another Dutch businessman has been accused of genocide for allegedly supplying chemicals to former Iraqi leader, Saddam Hussein.

The three kidnappers, who are unidentified, are at large. They had demanded a ransom of 300 kilograms (660 pounds) of cocaine. The kidnappers included two “South Americans.”