** The Palestinian Authority plans to rename some of Israel’s evacuated Gaza settlements after dead terrorists and leaders. ** 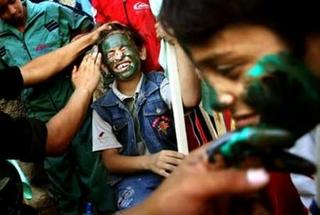 Palestinian children get their faces painted in combat colours before a rally celebrating the Israeli pullout from Gaza, in a refugee camp outside Gaza City August 25, 2005. The Palestinian Authority plans to rename some of Israel’s evacuated Gaza settlements after dead militants and leaders, possibly including Yasser Arafat and Hamas founder Sheikh Ahmed Yassin. (Reuters)

Aljazeera is launching a children’s channel:

The channel was inaugurated on Friday in the presence of Shaikha Mozah Bint Nasser Al-Missned, wife of the Emir of Qatar and the key force behind the venture, as well as 22 children representing the different Arab states.

JCC is the first Arabic-language channel dedicated to children and will produce 40% of its own programmes, a ratio touted as being one of the highest of any children’s channel worldwide.

“Through the concept of ‘Edutainment’, Aljazeera Children’s Channel (JCC) opens up avenues for Arab children to learn about different environments and cultures,” the channel’s statement said.

“It also helps them develop self-esteem, respect their traditions and values, appreciate people around them and develop a passion for learning,” it added.

But then again, who needs Aljazeera when you have the Western Mainstream Media! Just look at today’s caption blaming Israel for the nightmares of the Palestinian children! 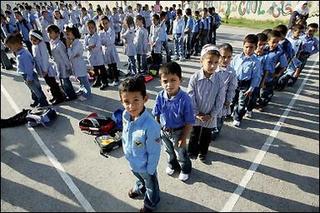 Palestinian schoolchildren wait outside their school in Al-Has, near the West Bank town of Bethlehem. Palestinian children started their school year hoping that Israel’s withdrawal from the war-weary Gaza Strip meant they were free of the military raids that made their student days a nightmare (AFP/Thomas Coex)

Also, today Iraqi President Jalal Talabani said that the country will need US troops for two years. He warned that a quick withdrawal of American and multinational forces “could lead to the victory of the terrorists in Iraq and create grave threats to the region, the United States and the civilized world.”

And, Talabani asserted that “All Arab media without exception are supporting terrorism,” he asserted.