Namibia donated $100,000 worth of fish to the hurricane victims. 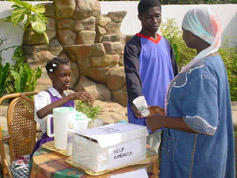 Former South African, Dr Ivor van Heerden, was able to pinpoint how bad the storm would be – and warn authorities days before it struck New Orleans.

“International solidarity in times like this one is more than necessary,” said Omara Atubo, an opposition lawmaker from the country’s troubled north that depends mainly on US aid to support about 1,6-million people who have been displaced by conflict.

“In the African custom, however rich your brother is, during times of sorrow, you reach out to him in however small way you can afford,” he said.

However, there have been many critics of those who have donated to those suffering on the Gulf Coast.

“When aid is needed anywhere, people should be assisted,” said Hellen Bisimba, a human rights activist in Tanzania, which has not yet contributed to Hurricane Katrina relief.

“What is being shown is a gesture of goodwill and a lesson that natural disasters can hit both the rich and the poor,” she said.

Some suggested that they would like to help but could not afford to.

In the impoverished Horn African nation of Eritrea, where two-thirds of its 3,5-million people will need in food aid this year, authorities said Asmara simply could not contribute.

“Eritrea is not providing material help to the US because we are ourselves asking for donations in view of the continuous drought here,” said foreign ministry official Ahferom Berhane.