After a trickle of good news from Iraq yesterday…

Haider Ajina sends a flood of “Good News from Iraq” today that you probably missed in the mainstream media.

Haider also points out that there is a new website, www.IraqPartnership.org to help American citizens learn more about official U.S. assistance for Iraq and make contributions to high-impact development projects. Iraq Partnership is a cooperative effort of USAID and GlobalGiving.

What follows in this post are the articles that Haider translated from the Iraqi media. Thank you, again, Haider, for your generosity and time in sharing this under-reported uplifting news from Iraq! 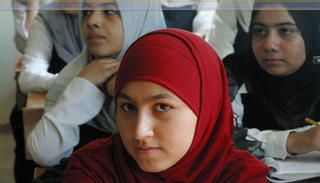 A New Iraq, A New Curriculum…

“Iraqi children have returned to a new school year to find their curriculum containing every thing except Saddam Hussein. After two years of negotiations the education ministry finalized new Iraqi school curriculum to replace the Baathist vision of history.

“Examples are that history books no longer call Iraq the victor in the Iran Iraq war. Nor do the books call for fighting the Zionist enemy. Nor do elementary school children learn how to read by reading sentences that read, “I love Saddam Hussein”.

“The curriculum rarely refers to Saddam, and it refers to his regime as a time when many Iraqis considered it oppressive and some sympathized with it. The first page of the old books had Saddam’s picture. Since the fall of his regime in March of 2003 schools used the old books but removed his picture and pages, which contained strong Baathist ideology. The Baathist had full control of the old curriculum and teachers complained about having to teach history, which does not acknowledge 50 years of Iraq’s history. The new curriculum does not mention the gulf war of 1991. While student used to study that the brave Iraqi Army forced the U.S. into a seize fire. The books also referred to events of 2003 as returning matters in Iraq to their foundations or roots.

“Mr. Mohamed Hannon of the education ministry said: “We do not want to discuss matters which will create problems under current conditions. We prepared subject to get away from bigotry, ethnic polarization and enticing violence and war”.

The tremendous success of the military offensive in Tal Afar was also a political success:

“Iraqi forces from the interior & defense ministries entered this city defeating the terrorists and criminals after killing them or arresting them. The city is mostly safe and under the full control of the Iraqi forces. Terrorist have been nesting in the city for 8 months and eventually controlled the city and life in it. This halted normal life and commerce in the city due to lack of security and government. We hope that gradually life in the city will return to normal, now that security and control have been restored, and locals will have the chance to elect suitable leaders.

* Several water projects in Fallujah have been completed despite the difficulties of working in a conflict area. With the support of local water officials, OFDA and its partners have repaired or replaced many major components of the city’s water infrastructure.

* Public education on the Constitutional Process enters the next stage. To ensure that a maximum number of Iraqis will be introduced to the constitution and its key issues prior to the national referendum, USAID partners and local NGOs outlined a program expected to reach between 150,000 and 200,000 Iraqis between the end of August and early October.

* In coordination with the Iraqi Ministry of Health (MOH), USAID implementing partners, including UNICEF, launched an emergency polio immunization campaign to prevent the resurgence of the disease. The campaign reached 4.7 million children in five days. Detailed micro-planning and micromapping of all districts was conducted to ensure comprehensive coverage.

* USAID trained 183 Iraqis in beekeeping basics in an effort to help vulnerable groups gain a sustainable income. The relatively inexpensive costs of maintaining an apiary and the sustainable income produced from its products makes beekeeping an ideal income generator for populations with few options.

Alramady tribes (mostly Sunni) kill one of Alzarqawi’s main aids, he is a Saudi citizen called “Abu Mohamed Alhajery”. The killing was in revenge for the killing of two tribes’ men during an armed conflict between Alzaraqwi’s followers and tribal members in one of Alramadi’s neighborhoods. This took place on the 15th of August as Alramadi tribes (mostly Sunni) defended Iraqi Shiite families in Alramadi against threats from Alzarqawi supporters to leave the area or be killed.

Alhajery’s body with the bodies of three Iraqi followers were found last Friday, all were terminated by the local tribes, eye witnesses said.

Alramadi is a predominant Sunni area of Iraq. Many Iraqi Arab tribes have Sunni & Shiite members and tribal loyalties are very strong. This is an incident where Iraqi Sunni Muslim Arabs are protecting Iraqi Shiite Muslim Arabs from a non Iraqi Sunnis (Alzarqawi & his followers). This is not unusual nor unexpected but commendable.

I wish to point out, however, that the Iraqi Sunnis in this case had little trouble finding Alzarqawi operative to take their revenge. Now if even more Iraqi Sunni Arabs to do the same for the rest of Alzarqawi’s operatives it would cripple the terrorist movement in Iraq. I believe we are heading in that direction.

Haider translated this poll that came out two weeks ago:

“A p
oll taken by “The Iraqi center for national development & dialog”, which is headed by former Planning minister Mahdi Alhafith. Reveals 88% of Iraqis polled said they will participate in the next vote (for the constitution) on the 15th of October. 5% said they will not vote 6% had not decided yet.

The Iraqi interior ministry confirmed that terrorist activities have declined markedly during the final days writing and the birth the constitution. This was evident by the statistics presented to the ministry from all over Iraq. This also shows that the steps taken by the ministry to improve security during that time have succeeded.

The spokesman for the ministry also added that we cannot compare the security situation during Saddam’s rule to the current one. Saddam’s oppressive dictatorship had over 11 security agencies, supplied with all kinds of weapons with no regards to the law or citizens. Members of the interior & defense ministries have been able to improve security in spite of terror threats, terror activities, and a shortage of weapons. Further the spokesperson affirmed that the current security forces respect human rights if they arrest or interrogate an individual. Member of the Iraqi security forces insist on protecting and guarding polling stations them selves, with no outside help. This way they can assure the success of the constitutional vote & subsequent vote. (Whether for or against the constitution).

Celebrations broke out in Iraq as the Constitution was agreed upon:

“Iraq’s Alnaseriah has spontaneous rallies in support of the constitution”

In Alnaseriah a number of jubilant street rallies supporting the Iraqi constitution broke out spontaneously after mid night, night before last. These rallies were showing the peoples jubilation and celebration of this historic achievement.

The celebrants expressed their hope that this historic occasion is a pivotal point in their lives towards advancement and implementation of freedom, equality, justice and peoples rights after 3 decades of suffering.

Such rallies have been reported in Nejaf, Karbala, Basrah, some Baghdad areas, and most southern and south central Iraq. Including Jubilant headlined in dozens Iraqi newspapers. This reminds me of the headlines I read when the Berlin wall came down and later Germany’s reunification on October 3rd 1990.

Why have I not read, heard or seen any of this in the main U.S. media?

Once again, a thank you to America, this great country of ours from the Ajinas in Iraq and us in Mckinleyville,CA for bringing hope, freedom and optimism to Iraq, a land which desperately needed it.