WOW! A TERRIFIC AND FAIR VIDEO OF THE PROTESTS FROM BOTH SIDES IN TEXAS HERE

A Small Army Arrives in Crawford! 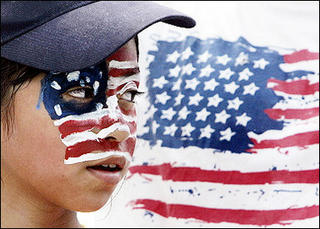 A young pro-Bush supporter watches during a pro-Bush rally outside the Crawford Community Center in Crawford, TX. Tensions mounted in President George W. Bush’s hometown, as a small army of his supporters poured in to challenge demonstrators opposed to the war in Iraq. (AFP)

This one-stoplight town of 700 residents near President Bush’s ranch braced for thousands of visitors today, most in a cross-country caravan for a pro-Bush rally and others to support Cindy Sheehan’s anti-war demonstration.

More than 3,000 people were expected at the school football stadium for a pro-Bush rally, the culmination of the “You don’t speak for me, Cindy!” tour that started last week in California.

It would be the largest counter protest since Sheehan started camping out off the road leading to Bush’s ranch Aug. 6, soon after his Texas vacation began. She vowed to remain unless he talked to her about the war with Iraq that claimed the life of her son Casey and more than 1,870 other U.S. soldiers.

Gregg Garvey is determined not to let the memory of those who made the ultimate sacrifice for this country in Iraq be forgotten. Gregg has been supportive of the troops in Iraq and confronted a member of the Crawford Peace House in a video on Channel 10 KWTX here at this site. 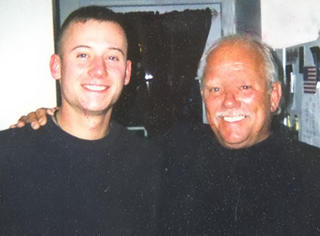 Army Sgt. Justin Garvey and his father Gregg, the founder of “Lest They be Forgotten”.

After the death of his son Justin, Gregg Garvey founded “Lest They be Forgotten” who’s mission it is to create, establish and help maintain hometown memorials to our men and women who have lost their lives defending the United States of America in our war against terrorism.

PRO-BUSH SUPPORTERS ARRIVE IN CRAWFORD, VIDEO HERE
Note: Regardless of the light turnout of protesters standing with her in Texas, Cindy Sheehan is still highlighted in this video . 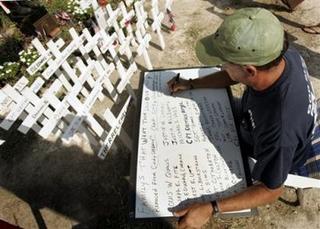 Mark Voss, of Crawford, Texas, writes the names of those families who do not want their relatives memorial cross at the campsite for Cindy Sheehan, at a gathering of pro-Bush supporters in Crawford, Saturday, Aug. 27, 2005. The crosses were removed from the makeshift memorials at Camp Casey. (AP) 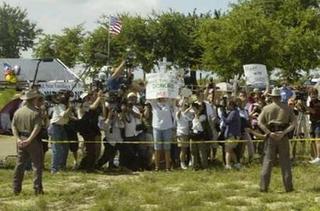 Cindy Sheehan continues to draw more photographers than protesters to her camp in Texas. After nearly a month of constant international media coverage her Anti-Bush Anti-US Policy protests can muster only 200 protesters on a good day to Camp Casey. (Reuters)