THE US HAS WARNED THE KING OF NEPAL TO RETURN TO DEMOCRACY,
VIDEO HERE

The government released six students accused of burning pictures of the ruling family. The students were held for over three weeks. 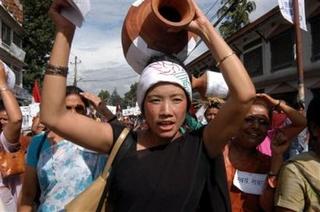 The US is warning Nepal to return to democracy or face more chaos and conflicts with rebel forces:

The comments came as the bodies of 50 soldiers killed by Maoist rebels in a remote western district were recovered.

The rebels said they lost 26 men in the raid on an army camp on Sunday in some of the bloodiest fighting since King Gyanendra seized power in February.

The rebels said on Wednesday they would treat humanely and release more than 50 soldiers taken captive.

“Unless the principles of freedom, civil rights and democracy once again take root through a process of true reconciliation among the legitimate political forces, I fear Nepal will inexorably slide towards confrontation, confusion and chaos,” he said.

He was also critical of the Maoist rebels, accusing them of having a “plan to turn Nepal into a brutal and anachronistic state”.

The US ambassador to Nepal, James Moriarty, accused King Gyanendra of reneging on reforms he had promised to introduce after he dismissed the government and assumed absolute control.

Nepal has laid off an estimated 1,000 journalists as the King has taken control of the society. 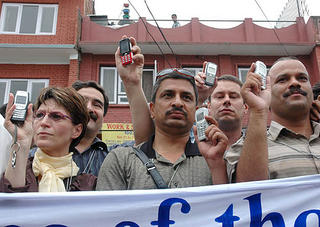 These journalists had their phone service disconnected by the government.

At this time the future of Nepal seems uncertain. However, the country did make great strides in its 10 years of democracy:

The country witnessed significant economic and social development during it’s 12-year democracy. He said the national poverty index, over 42 percent in 1990, when democracy first took hold in Nepal, decreased by 11 percent.

Khanal also said only 7,036 kilometers of roads had been completed during the 30-year autocracy, whereas it grew to a network of over 16,834 kilometers after 1990.

“Nepal made significant achievements in the field of education, health and social sectors during the democratic period,” Khanal said. “The literacy rate that stood at merely 39.6 percent before 1990 rose to over 55 percent over the next twelve years.” 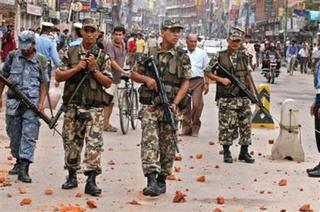 Soldiers patrol in the capital of Katmandu after a protest earlier this month against university students demanding more rights. (AP)

40 Soldiers were executed by Maoist Rebels in the deadliest clashes since the King grabbed power earlier this year:

Nepal’s army accused Maoist rebels of executing 40 soldiers in the deadliest incident since the king seized power in February, as the US ambassador warned the country risked sliding into chaos.

The army said its soldiers had been lined up and shot in the head after a battle which raged in the northwestern town of Kalikot throughout Sunday night, bringing the clash’s known death toll to 66 with another 76 soldiers missing.

“The terrorists inhumanely killed 40 security men … by lining them up and shooting them in their heads,” an army statement said. It added that some of the soldiers’ bodies had been mutilated.

“The security forces are continuing the search for the rebels in the areas from where they are most likely to escape,” the statement said.

The rebels, who said 26 of their fighters were killed, on Monday claimed they killed 159 soldiers. The Nepal government via state television late Tuesday said 300 rebels had died in the assault.

Update: Robert Mayer at Publius Pundit has more on the situation in Nepal, today.