SECRET VIDEO OF ZIMBABWE’S “CLEAR OUT THE TRASH” PROGRAM, HERE 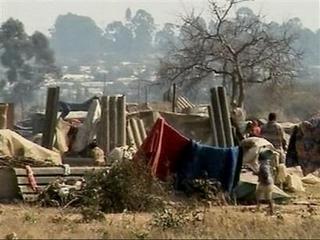 This picture alleges to show people cleared out of camps for those the Zimbabwe government made homeless under its Operation Clear out the Trash. (AP)

A smuggled film of the situation in Zimbabwe is now making the international rounds:

Amnesty International has released a secretly-shot film from Zimbabwe, showing what it says is the squalid aftermath of Harare’s slum clearances.
The clearances have left about 700,000 people without their homes or livelihoods, according to UN estimates.

The human rights group said its film showed people made homeless and then dumped at an informal site.

The images, shot in August, depict a makeshift camp and people queuing up for water at the site near Harare.

Amnesty said people there had to cope with shortages of food and clean water. 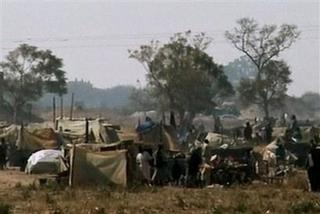 Amnesty International alleges to show people cleared out of camps for those the Zimbabwe government made homeless under its Operation Murambatsvina, or Operation Drive-Out-Trash. (AP)

Zimbabwe has been trying to be secretive about its “cleanup” campaign:

Zimbabwe’s government cleared out camps for those it made homeless in a so-called urban-cleanup campaign, then secretly moved their inhabitants to the outskirts of the capital in even worse conditions, a human-rights group said yesterday.

Amnesty International released footage it said had been smuggled out of Zimbabwe. The footage showed people sheltering in an area known as Hopley Farm, outside of Harare, under little more than blankets and sheets of plastic and lining up with buckets at a mobile water tank.

According to the human-rights group, the government moved the refugees to the area the same day a U.N. investigator condemned conditions in the camps where they had been living before. Amnesty said there was no shelter or toilets at the camp and limited access to running water.

Zimpundit has more on the economic situation in Zimbabwe today.

Sokwanele is always great with their coverage on Zimbabwe.

And, Publius Pundit has been following the tragedy in Zimbabwe.

Normblog has more information on the attempts to hide the destruction from the outside world.

For more on AI you can visit their website HERE