Her father was a tribal sheik who was shot in 1994 at his front door by Saddam Hussein’s former intelligence agency in Beirut (possibly paid for by “Oil for Food” money!), where the family had fled from Iraq. Ms. Suhail, who said she had recently received death threats, now lives in Baghdad with her husband, an official in the Ministry of Human Rights. 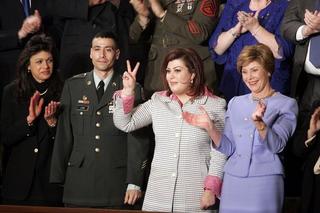 “Eleven years ago, Safia’s father was assassinated by Saddam’s intelligence service,” Mr. Bush said in his tribute to her during his State of the Union Address in February. “Three days ago in Baghdad, Safia was finally able to vote for the leaders of her country, and we are honored that she is with us tonight.”

The crowd erupted in applause, and Ms. Suhail waved her fading purple index finger, which signified she had voted, in response.

“It’s still there,” Ms. Suhail said in a telephone interview (in February) about the
ink. “It’s not as bright. I wish it would stay another three or four
months.” 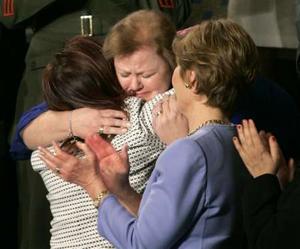 President Bush said Ms. al-Suhail told him her country was occupied by Saddam Hussein for 35 years, and she thanked American troops for paying the cost.

Today, Safia is Iraqi Ambassador to, of all places, Egypt. She is also working in Iraq for women’s rights under the new Constitution. 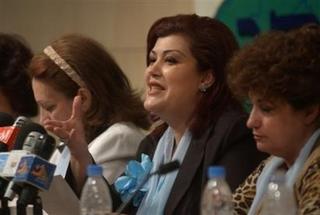 This week, Safia showed up in the news again…
Iraq’s Ambassador to Egypt, Safiyah al-Shuhail, center, speaks with other prominent women in Iraq during a meeting, Monday, Aug. 1, 2005, in Baghdad, Iraq to discuss the future of women’s rights in Iraq. (AP)

This week a group of Iraqi women leaders, including Safia, met to demand women’s rights be included in the new Constitution:

The informal group issued a statement demanding that Islamic law, or sharia, not be one of the sources of the constitution; that Iraq should abide by all international rights treaties and that all Iraqi men and women have equal legal rights.

It also called for female representation “in the three branches of government and in other decision-making positions (to) be no less than 25 percent.”

The role of Islam remains a major stumbling block in completing Iraq’s new constitution: an early draft of the constitution published in the official Al-Sabah newspaper on July 26 suggested that Islam would be “the official religion of the State” and “the main source of legislation.”

Yesterday, August 3rd, the US inserted itself into the Constitution discussion:

On Tuesday, U.S. Ambassador Zalmay Khalilzad urged the framers to protect women’s rights as a “fundamental requirement for Iraq’s progress.”

“My focus is to help get a constitution that does this,” Khalilzad told reporters. “Of course, the Iraqis will decide but we will help in any way that we can.”

Khalilzad said his government would encourage Iraqi politicians to exclude any constitutional articles that discriminate or limit opportunities for any Iraqi citizens.

Just like her father before her, Safia is out front courageously pushing for democracy and human rights.

Safia, is walking in her father’s footsteps.

And, Safia’s father would be very proud!