This seems like a far cry from where this community was last year! 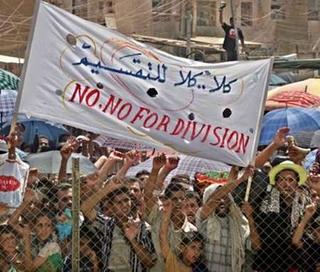 Shiite Muslims hold up banners as they protest following Friday noon prayers in the neighborhood of Sadr City, in Baghdad. The worshippers protested against a federal political structure in the Iraqi constitution. (AFP)

Sunni leaders say they are resigned to the Kurds maintaining their current autonomy in the north — though not to the Kurds extending their territory into the northern oilfields — but said they would not tolerate an autonomous Shi’ite region.

Ethnic tensions in the northern oil city of Kirkuk spilled on to the streets on Saturday; hundreds of Arabs demonstrated against federalism — code for Kurdish ambitions to annex Kirkuk.

Protesters were out with umbrellas, not guns. 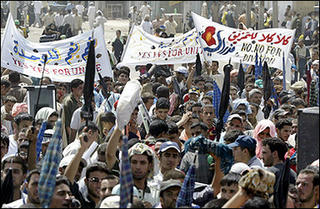 Baghdad’s Shiite stronghold Sadr City was once a hotbed of unrest but is now one of the brightest successes for U.S. security forces:

So far this year, there has been only one car bombing in the neighborhood, and only one American soldier has been killed.

A year ago, militiamen garbed in black and armed with automatic weapons and rocket-propelled grenades roamed the streets in open revolt against the American presence. But U.S. troops quelled the uprising, and today calmly patrol the district, aided by loyalists of the radical cleric who spurred the violence.

Life in Sadr city, a sprawling slum of 2.5 million people, is dominated by the radical Shiite cleric Muqtada al-Sadr, whose face is on posters plastered everywhere. At police checkpoints, unarmed men from the Sadr Bureau wearing yellow shirts and black pants enforce security, keeping car bombs and foreign fighters out.

“They’re hoping they can minimize the coalition’s contribution to security,” said Lt. Col. Gary Luck, whose U.S. Army unit is responsible for security in Sadr City.

After a series of meetings with American and Iraqi army commanders, young men loyal to Sadr also patrol the streets at night. They carry wooden clubs and are considered by the Americans a neighborhood watch.