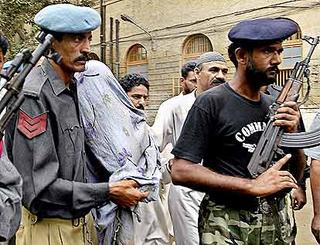 Hashim Qadeer, an Islamic militant involved in the Danile Pearl, went to court in Pakistan on Saturday:

Police captured Qadeer in the eastern city of Gujranwala on July 28, and officials later turned him over to Karachi police for questioning in connection with the kidnap-slaying of Pearl, who disappeared from Karachi on January 23, 2002.

Pearl’s execution and beheading was videotaped by his kidnappers, and his remains were found in May 2002 in a shallow grave on Karachi’s outskirts.