The pain still lingers for the family of Sheikh Taleb al-Suhail.

It has been over ten years since Sheikh Taleb was gunned down by Saddam’s thugs. The family was powerless then to do anything except promise to work against the Saddam Hussein Regime to avenge their father’s death when the time came. And, that is exactly what Sheikh Taleb al-Suhail’s family did to honor his memory.

Now one of those same thugs who organized the assassination of Sheikh Taleb wants to visit the Sheikh’s grave. Of course, the family is in an uproar. But this time they have a voice to fight back! 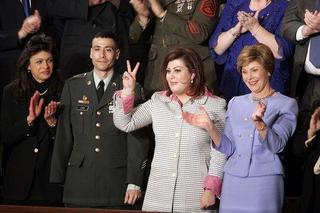 “Eleven years ago, Safia al Suhail’s father was assassinated by Saddam’s intelligence service,” president George W. Bush said in his tribute to her during his State of the Union Address in February. “Three days ago in Baghdad, Safia* was finally able to vote for the leaders of her country, and we are honored that she is with us tonight.” (Whitehouse)

Sheikh Taleb al-Suhail was murdered by Saddam’s agents in Beirut in April 1994.

Sheikh Taleb a former Iraqi diplomat and head of the Bani Tamim tribe in central Iraq, a mostly Shia Arab tribe that may have as many as a million members, Sheikh Taleb had used his connections to attempt a coup against Saddam’s regime in 1993. The coup failed, but Sheikh Taleb, who had left Iraq in 1968 when the Baathists seized power, continued to work for Saddam’s overthrow.

In response, the Iraqi regime recruited a Lebanese businessman and supposed friend of the al-Suhail family George Tarkhaynan. With Tarkhaynan’s assistance, Iraqi diplomats gained entry to the al-Suhail home in Beirut and gunned down the 64 year old sheikh in April 1994.

Although initially detained by the Lebanese authorities, Tarkhaynan and his three fellow conspirators, all Iraqi diplomats, were released after spending just three years in prison. Saddam’s regime bribed the Lebanese government to release the assassins from jail.**

Tarkhaynan was sent to Iraq where he is believed to have been given the vouchers to trade oil sold as part of the United Nations Oil-for-Food program. These vouchers, a reward for murder, were worth around $3.5 million: They were part of an elaborate bribery system that Saddam’s regime invented to siphon money off from the sale of oil. The oil proceeds were supposed to be spent on food and humanitarian goods for the Iraqis. Instead, millions ended up in the pockets of men like George Tarkhaynan. 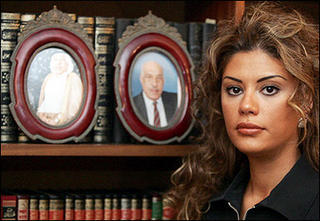 Another daughter, Nura Tamimi, poses near pictures of her slain Iraqi father Taleb Souheil in Beirut. Tamimi condemned the appointment of Awad Fakhri as a senior official in the Iraqi foreign ministry claiming that he was involved in the assassination of her father in 1994.(AFP)

The family of Sheikh Taleb al-Suhail who Saddam Hussein had assassinated in Beirut in 1994 lodged a protest against a planned visit by an Iraqi diplomat who was head of mission in Lebanon at the time:

The diplomat, Awad Fakhri, according to the Lebanese inquiry, “had tried to sneak the two murderers out of the country” after the killing of Taleb Suheil, the victim’s daughters wrote in a protest to the foreign ministry.

Fakhri, who has been named head of the Arab affairs department at Iraq’s foreign ministry, was “expelled at the time by Lebanese authorities”, the letter noted. (While Iraqi Ambassador to Algeria, Fakhri was also alleged to be involved in assassination attempts against other prominent Iraqi opposition leaders in Europe.)

“It is thus inconceivable that the Lebanese authorities should receive on their territory an Iraqi official who was an accessory to murder in their country,” said the letter, a copy of which was obtained by AFP.

The foreign ministry had no comment on the protest.

But, today the Suhail family will no longer be silent!