Newsweek never did take a break after that fiasco about Koran and toilets and the riots and deaths they caused. They never did let up and write some responsible, Pro-American stories. Shortly after that story they put this on a cover of a foreign edition: 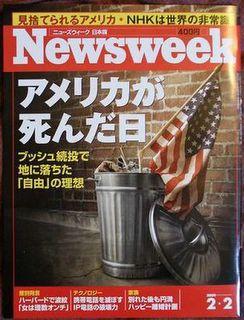 Is there any doubt about where the heart of Newsweek lies?

Is it no wonder? When the US declared War on Iraq little did we know where the biggest blows would come from. The war may have been fought brilliantly. The casualties (God Bless each hero!) may be very low, the milestones, each one, has been met. But, the assault from the left-leaning media continues to drain Americans of their pride and replace it with the false notion that we are the evil-doers and that we are losing.

As Glenn Reynolds notes today from a piece written by Damien Cave, “Where are the War Heroes?” …

A sad situation for the rest of America blasted with non-torture at Abu Ghraib one day and a fake Koran in the toilet story the next!