The students are out of class again… 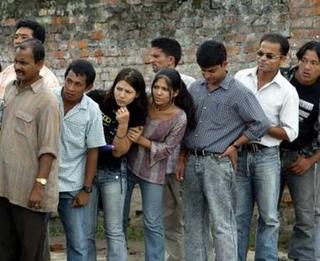 Police arrested many of the students who were out protesting on Sunday:

Police have beaten college students with batons and fired tear gas in a bid to stop them from protesting in Nepal’s capital over higher government-set oil prices.

At least 21 students and several police were injured on Sunday, police and witnesses said. 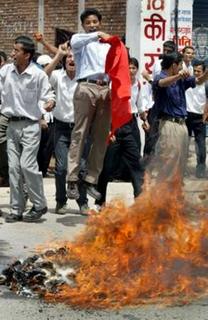 Nepali students throw stones during a demonstration against the king earlier today. (Reuters)

Students were stopped as they attempted to hold rallies outside at least five colleges in Katmandu, police officials said on condition of anonymity in accordance with official policy.

Police said they fired tear gas and charged the students with batons outside two of the colleges, adding that 21 students were injured in the clashes.

They also used batons to halt the protests at the remaining three colleges. 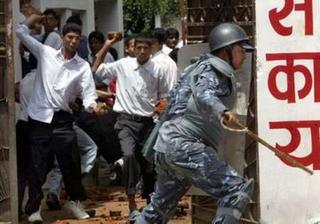 A Nepali policeman runs away from stone-throwing students at the Ratna Rajya Laxmi Campus during a demonstration against the king and protest against the price hike on petroleum products, in Kathmandu, August 22, 2005. (Reuters)

In an another account of the protests:
At least 18 students were arrested and four- dozen others injured, 10 of them seriously, in clashes that followed the demonstrations organized by the eight student organizations against the recent price hike of petroleum products in various campuses in the Valley on Sunday [21 August]. Thirteen students from Amrit Science College in Lainchaur were arrested after police stormed into the college premises this morning.

The situation became tense after protesting students burnt tyres and chanted anti-government slogans disrupting the traffic. Ten rounds of tear gas shells were fired to disperse the protesting students, who threw stones in return. Several policemen and 10 students were reported injured, three of them seriously, in the incident. Police have forced the students to leave the hostel after entering the college, said reports.