** What started as a small gathering grew to more than 52 groups signed up to be in the procession honoring a local area Hero! ** 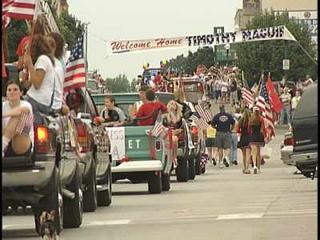 Maguire was serving as a field radio operator in Iraq when he was seriously hurt. His family, friends, and community wanted to let him know how much his service and his sacrifice are appreciated.

It started as a small gathering. Then it grew. In the end, they had 52 groups in the procession and hundreds lining the streets of downtown Festus.

Maguire says, “I heard about it, but I didn’t know it was going to be this big of course.” 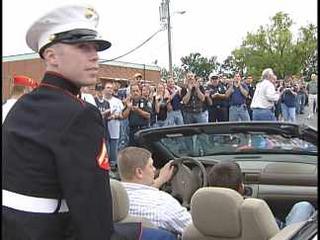 Maguire had only been in Iraq two months when a roadside bomb exploded near his Humvee. He lost his arm and suffered severe trauma to his head. He just returned home to Festus on Saturday, “Hurt or not, I think everybody should have something done for them like this whenever they get back.”

The turnout surprised Maguire’s mother. Marie Wingron says, “It means that my son and all the people that are over there are doing something that means something to people.”

This homecoming means different things to different people. Army veteran Cary Kellet had his own reasons for marching, “I think it’s fantastic because I’m from the Vietnam era and we didn’t have this kind of welcome home.”

Others came because they too have loved ones in Iraq. Alice Naucke says, “It’s just very hard to know we’ve got so many kids over there.”

Wingron adds, “The parade’s about Timothy. But it’s not about just him. It’s about him and everyone else that’s fighting for our freedom.” 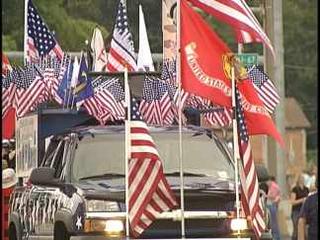 Also, thanks to 97.1 Morning Talk Show Host Jamie Allman and Guest Host Crane Durham for mentioning this story on their show this morning.

A special thanks to Michelle Malkin and Glenn Reynolds, the Instapundit, for spreading this Hero’s Story.

And, may this good news “lift the spirits” of my friend The Anchoress and calm Trey Jackson‘s nerves a bit after reading his comments section.

Update: Here is the photo of Lance Corporal Timothy Maguire from the St. Louis Post Dispatch today. The photo was not included in their online edition. 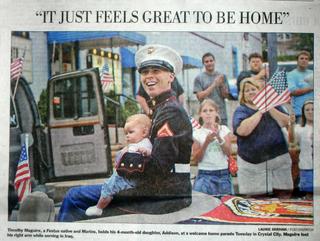 Update: (August 31, 2005) The St. Louis Post Dispatch carried the story of Lance Cpl. Timothy Maguire today. Here is some information on how you can help Timothy:

Contributions to a trust fund set up in Maguire’s name can be made at the Commerce Bank in Festus, or mailed to:

in care of Tim Maguire.