A Silent Victory in Iraq 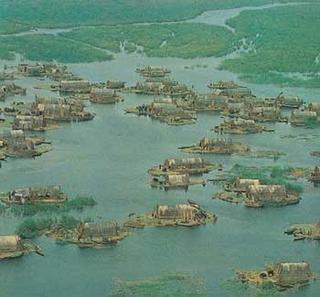 A photogragh in 1977 of the marshlands before Saddam drained the land of water. (Nik Wheeler)

The renewed life of the marshlands is an astounding success story in Iraq today:

The news from the Mesopotamian Marshlands is astounding. In early 2003, Iraq’s Ministry of Irrigation was still constructing water diversion and drainage structures in the marshlands.

Local tribes have pooled their resources to hire backhoes to breach the embankments holding back the floodwaters; they have opened sluice gates, stopped pumping operations, and re-directed water flow back to where it was wanted – in the marshlands. And the water complied, slowly yet faithfully flowing back in its ancient pathways.

Saddam drained the marshes after the 1991 War to control the marsh arabs who lived there and had been giving the regime trouble:

Under Saddam Hussein, the area of marsh was reduced to a tenth of its former size, as the government punished people living there for acts of rebellion.

The latest United Nations data shows that nearly 40% of the area has been restored to its original condition.

Bird and animal species are also returning to the marshes:

Water now flows into scores of small rivers and streams the former regime had either blocked or filled with earth.

“We have breathed life into 70 such streams which are now used to flood the dry areas and carry water to marsh farmers engaged in agriculture,” he said.

The Marsh area used to cover about 8,000. The former regime drained the area after the 1991 Gulf War to retaliate against opponents who used the marshes as a refuge.

The flooding also has made it possible for many of the bird, fish and animal species which once thrived in the area to return.

Chemical Ali may be tried for his role in the extermination of the Shiite resistance in the marshes of Iraq after the 1991 War. The marshes were later drained.