12,000 Rally in support of Iraqi Constitution! 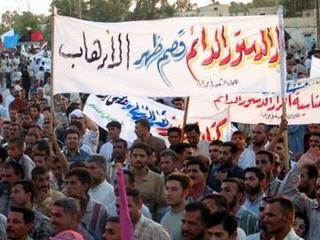 Iraqi demonstrators hold banners in support of the draft constitution in Kut, Iraq, yesterday, August 29. (Reuters) Protesters said that passing the Constitution would help end the terrorist attacks in the country. (FOX)

The vote for acceptance of the Iraqi Constitution will be on October 15th. Voters will be asked “yes” or “no” on whether the proposed constitution should be adopted.
Only iraqis inside the country will be allowed to vote. 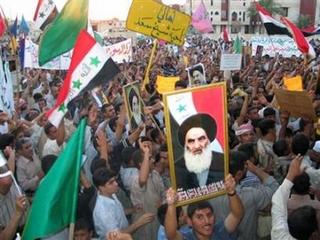 Iraqi demonstrators hold banners in support of the draft constitution and pictures of Iraq’s religious leaders in Kut, southeast of Baghdad. (Reuters)

A poll taken by “The Iraqi center for national development & dialog”, which is headed by former Planning minister Mahdi Alhafith. Reveals 88% of Iraqis polled said they will participate in the next vote (for the constitution) on the 15th of October. 5% said they will not vote 6% had not decided yet.

“Mr. Alhafith said to Alhayat newspaper: The poll included 3667 Iraqis, 53% men, the polls showed that 88% of those support holding the constitutional vote under current condition, while 10% were against for various reason. 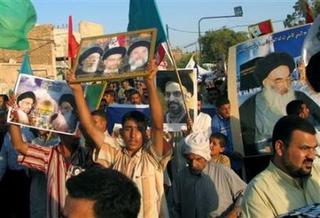 12,000 demonstrators rallied in Kut in support of the Iraqi Constitution. (Reuters)

Britain’s Foreign Secretary Jack Straw spoke with reporters about the Iraqi Constitution and to refute claims that the UK is a terrorist target because of the Iraq War:

The foreign secretary, Jack Straw, this morning urged patience with the wrangling over the Iraqi constitution, pointing out that similar processes in the US and Northern Ireland had taken years to complete.

He told BBC Radio 4’s Today programme there was “no guarantee whatsoever” that Britain would not have been a target for terrorists had it not taken part in the war in Iraq.

“If you certainly look at the history of the United States, if you look indeed across the water into Northern Ireland, where we are in a sense involved in a constitutional process, you see where you have people, opposed communities, trying to come together, the process is difficult.”