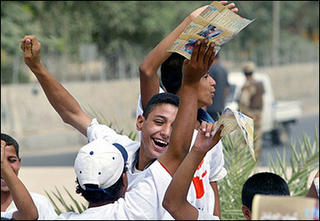 Some thirty youth gathered to demand ‘Children’s Rights’ are included in the drafting of the new Iraqi constitution which is taking place at the moment by the 71 members of the constitutional committee. (AFP)

The effects of continued conflict can be devastating on a child. And, even though Iraq is not at the same point as other nations, the children of Iraq continue to suffer along with the adults when there are continued bombings and violence by terrorist thugs.

Here is a list of ways in which children may be affected from continued armed conflict:

– Psychological trauma – war-affected children may suffer from a wide range of symptoms such as developmental delays, nightmares, lack of appetite and learning difficulties.

– Sexual abuse – girls and women are particularly vulnerable to sexual violence, including rape, sexual mutilation, forced prostitution and forced pregnancy. As a result, there is increased risk to exposure to sexually transmitted diseases, including HIV/AIDS.

– Increased workloads, especially if a child has lost parents and other family members. In some cases, war-affected children may be heading households and taking care of their siblings. Child-headed households are particularly vulnerable to exploitative labour and prostitution.

– Increased threats to their survival from exposure to disease, malnutrition, and reduced access to or availability of basic health services. 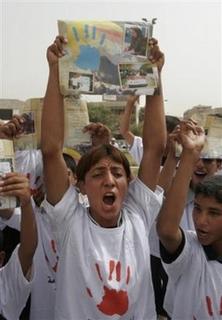 Mohammed at Iraq the Model has more on the women’s protest from earlier this week with come incredible pictures from the event.
Publius Pundit also carried the story.