At least 1,000 people had gathered at Esteghlal Park in the evening, peacefully demonstrating in protest to the brutal torture and murder of a young Kurd by police in the neighbouring town of Mahabad which had acted as a catalyst for widespread anti-government protests in Kurdistan and Western Azerbaijan provinces for the past three weeks.

Protestors held up placards demanding justice for the killers of Shoan Qaderi. There were also chants against senior officials within Iran’s theocratic leadership. 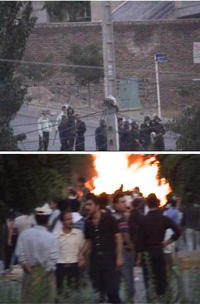 The demonstration was organized to protest the acts of the brutal regime in the cities of Mahabad, Sardasht, Piranshahr, Shino, Divandareh and Baneh, where the Islamic Republic security guards have opened fire on peaceful demonstrations and massacring civilians.

In support to the people of above mentioned cities, all shops and markets were closed and an outsized demonstration was organized in at least 13 district of the city of Sanandaj. Slogans such as “down with the Islamic Republic, Long live freedom, Ghasemlou we continue in your path were chanted during the demonstration as well as the Kurdish national anthem, and Ey Reqib.

The security guards of regime that were conveyed from Isfahan and Kermanshah to Sanandaj opened fire on the peaceful demonstration. At least 6 people were killed and various injured among the demonstrators.