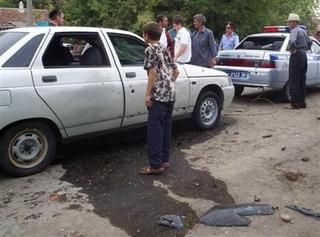 Local residents look at the cars damaged by explosions in which Ingush Prime Minister Ibragim Malsagov was wounded in Nazran, Ingushetia, Thursday, Aug. 25, 2005. Two bombs exploded Thursday in the southern Russian city of Nazran, wounding the second-highest-ranking official in the mostly Muslim region of Ingushetia and killing his driver, in what was described as an assassination attempt. Two other people were also injured. (AP)

The Prime Minister of Russian Ingushetia, a neighbor to Chechnya, has been wounded in an assassination attempt:

Two powerful explosions hit the Ingush city of Nazran on Thursday. The number of casualties is yet unclear. Ibrahim Malsagov was wounded, as well as his bodyguards and passers-by, Interfax news agency reported.

Reuters quoted a spokesman for Ingushetian emergencies ministry as saying that the blast destroyed Malsagov’s car when it was passing by a market. A security guard died later in hospital. Malsagov had upper leg wounds, the spokesman added.

Nazran is the main city in the Ingushetia region, which has suffered frequent spillover violence from Chechnya and attacks by native militants and criminal gangs. Last week, the Nazran police chief was wounded when unknown assailants detonated a radio-controlled land mine as his car was passing.

The republic’s police and security forces were also targeted in a devastating overnight assault by militants in June 2004, in which some 90 people were killed. 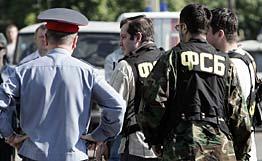 Russian Authorities are claiming it was a terrorist attempt to destabilize the area:

Today’s attack on the Ingush prime minister is an attempt to destabilize the situation in the republic and in the Northern Caucasus, an Ingush official said.

Commenting on the assassination attempt against Ingush Prime Minister Ibrahim Malsagov, Chechen President Murat Zyazikov, said, “There are forces that cannot accept the fact that they failed to expand the conflict, and they are not satisfied with the course toward prosperity and security taken by the republic,” he said.

The president said there was a connection between today’s attack, militant attacks on the republic, and the attempt on his life last year.

At the same time, Zyazikov said the republic had enough police and security agencies to counter the terrorist threat.

“We are not going to deploy additional troops in the republic,” he said.