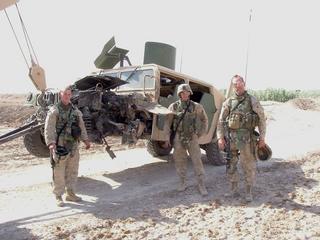 A roadside bomb hit this humvee from the Thundering Third while on tour in Iraq. A similar roadside bomb struck the humvee that Major Steve McGaughey was riding in while serving in Iraq.

Embedded with officers from Poland, Bulgaria and Romania, Major Steve McGaughey miraculously walked away from a roadside bomb attack in Iraq:

One Illinois serviceman survived a close call while in Iraq and was awarded the Purple Heart. He just returned home to Brighton, Illinois.

Major Steve McGaughey still has a separated shoulder and injuries to his knee and back. But after surviving an explosion and humvee accident near Baghdad, his friends call him the walking miracle.

He’s spent 21 years as a National Guardsman, this last year overseas. He was embedded with a multinational unit, as a liason to officers from Poland, Bulgaria and Romania. Mcgaughey says, “‘We’re there to do a job’ is the way we look at it. We knew every time we went off the base there was a liklihood of something happening.”

The accident happened last February. Major McGaughey was in a convoy from Baghdad, when an explosive device blew his humvee off the road. At the time, someone had a camera. Pictures show the wreckage and even show McGaughey in a ditch immediately afterward, “Miraculously we all walked away from it.”