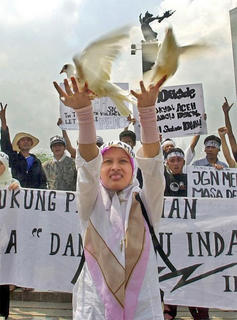 An Acehnese student releases doves during a peace rally in Jakarta today. (Reuters)

Indonesia’s government and rebels in tsunami-devastated Aceh province sign a truce on Monday with hopes high for an end to nearly three decades of fighting.
The pact, to be signed in Helsinki where peace talks were brokered this year, contains provisions for an amnesty, disarming Free Aceh Movement (GAM) fighters, withdrawing government troops and monitoring by foreign officials and soldiers.

There have been sporadic clashes in Aceh since the deal was agreed last month, with GAM and Jakarta blaming one another.

GAM spokesman Bakhtiar Abdullah said while there were still concerns over security, there had been a substantial decrease in military operations and fighters would start laying down their weapons as soon as the agreement was signed. 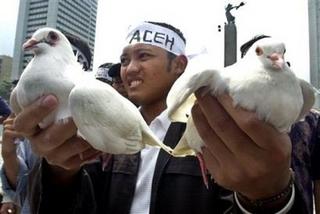 The government is planning to offer jobs to the rebels for the tsunami reconstruction:

“Our government needs to make sure they have enough jobs. They need land to feed their families. We need to help them build houses … this is the most important thing,” Vice President Jusuf Kalla told Associated Press late on Wednesday.

He said that a lasting peace would depend on the government’s ability to integrate former combatants into society.

The Indonesian government and GAM are bracing for the historic peace agreement, which covers, among other things, reinstatement of civil and political rights of GAM members and their integration into society.

The rebels will be able to compete in elections next April.

Although the peace agreement is set to be signed on Monday, the government still fears the possibility of new clashes with the rebels.