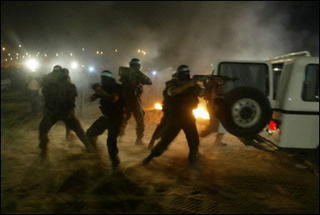 Hamas militants practice their skills for the cameras. (AFP/Mahmud Hams)

Hamas says that it will not give up its arms when Israel pulls out of Gaza. Hamas also says that this is not where the battle against Israel stops:

“This army will continue to defend our homeland as long as one inch of Palestine remains occupied,” Mahmud Zahar told reporters, after attending a training session of Hamas’s military wing, the Ezzedin al-Qassam Brigades.

During a keynote speech to the Palestinian parliament earlier this week, Palestinian leader Mahmud Abbas urged all militants to end their rocket attacks on Israeli targets as part of a larger appeal for calm during the pullout.

“It is criminal to claim that there is only one weapon,” Zahar said, in reference to declarations by Abbas insisting that the Palestinian Authority was the only legitimate security tool.

Hamas, the group behind the majority of anti-Israeli attacks during the five-year uprising or intifada, claims the rocket attacks were instrumental in persuading Israel to leave Gaza after a 38-year occupation. 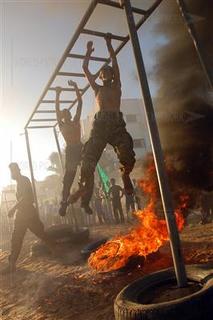 Hamas “militants” train for terror at a camp in Gaza. (WPN)

“These men will train others so that all Palestinians become mujahedeen and liberate the whole of Palestine,” Zahar said Friday, in reference to his organisation’s fighters.

“It is great crime to say that these groups should be dismantled,” said the militant leader, cheered by thousands of Hamas supporters chanting “Allahu Akbar” (God is greatest).

“They are the ones who provoked the end of the occupation and not the gun-toting drunkards who celebrate in the streets,” he added.

Hamas has often sought to draw parallels between the Gaza pullout and Israel’s May 2000 withdrawal from southern Lebanon under military pressure from Hezbollah, the Lebanon-based Shiite organisation.

Hamas and its smaller rival Islamic Jihad have expressed support for the principle of the pullout but have been non-committal when asked to provide guarantees that they would cooperate after the withdrawal.